My brief take in the Christian Science Monitor:

Yet despite the recent rise in food prices, over a longer period of time, spending on food as a percentage of household income has been declining, points out Michael Rizzo, senior economist at the American Institute for Economic Research (AIER) in Great Barrington, Mass. For example, in 1970, food represented 19.3 percent of household expenditures. By 2006, it had shrunk to 12.6 percent.

“One of the reasons for the decline is the huge increase in productivity: It’s become less expensive for the farmer to produce food,” he says. “Even among the poorest, the share of their budget going to food purchases is at an all-time low.”

These two tables tell an even better story: 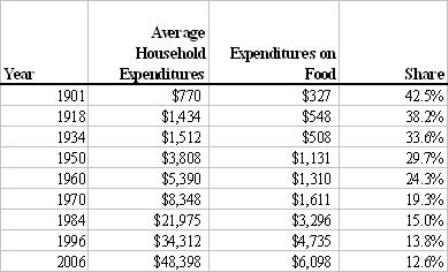 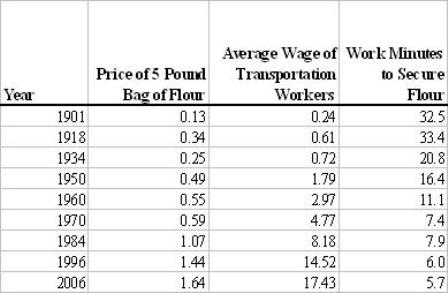 The remarkable thing about this is that if you look back to the middle-ages, it probably took well over 200 man-hours for someone to produce a 5-lb bag of flour for themselves. Now it takes about 5 minutes.

What we are missing is how much of the typical food budget is spent on flour and flour related products. A bagel is something like 25% flour. If that is the case, given the variety of food we eat, I can’t imagine the share of flour exceeds 10%. So even if flour prices doubled and all of those price increases were somehow passed onto us (unlikely), then the typical American’s food bill would increase by $610 (2006 is latest data I have). That $610 represents just 1.26% of the typical family’s budget in 2006. Look back to 1901. Even making the unlikely assumption that flour makes up 10% of their diet (it was likely more for reasons I stated above), a doubling in flour prices would result in a food bill increase of $64. But this $64 represents 8.3% of the budget of Americans at that time. To compare, modern Americans spend LESS than 7% of their budgets on health care today.

For a future post, why have flour prices gone up so fast? Surely it’s the perilous work of the free-market again, right?