The Federal Reserve spent a good deal of money redesigning this bill as well as the $10, $20 and soon the $100 because of fears that counterfeiters (phony money makers in their parlance) have grown increasingly sophisticated over the years. I’d like to ask the folks at the Fed one question, “what is the problem created when “phony money” is entered into the economic system?” I suspect I would not get an answer. Aside from the fact that there is no a priori reason that phony money is a bad thing if it is universally accepted as a medium of exchange (it is also a fiat currency, no?), I do not think that the Fed would own up to this: 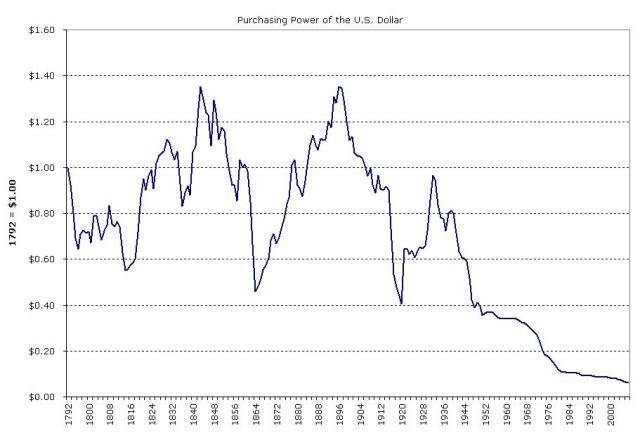 At the time the Fed was created (just prior to WWI) the dollar was worth just about what it was worth when the Bill of Rights was ratified. Since then, it has lost over 95% of its purchasing power. And this from an institution whose objective is to maintain price stability.