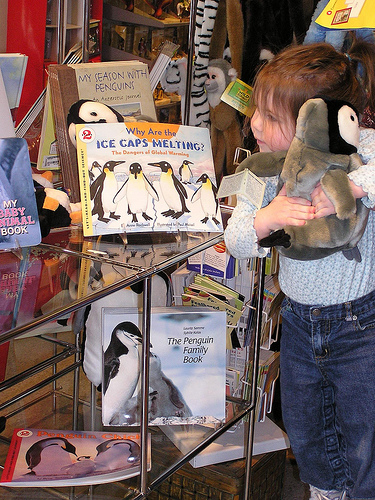 That was in the gift shop. A little earlier I finished reading the following placquard:

“The slash-and-burn agricultural practice of these early ____ meant they had to move their villages every 15 to 25 years to find fresh sources of fertile soil, firewood, and game. This has made it difficult to arrive ata definite sequence for the Neuretral, Erie and Wenro settlements that were in Western New York at various times prior to 1655. By 1655, the ______ had pushed westward into the Niagara Frontier and displacesd the last of the local tribes. This ten became the hunting territory of the _____, the westernmost of the confederacy, whose main villages were in the Genesee Valley until 1779, when they were destroyed.”

Of course, they are referring to the Iroquois nation of native Americans … and that was right next to a display talking about how they lived in harmony with the environment.

And yes, that is our daughter Amelia. Her favorite object in the whole world is waddles her stuffed (soon to be fricaseed) penguin. At least when we are at the museum with our family, we can talk to her.