Look at what has happened to the scarcity of arsenic over the past 100 years. (aside: arsenic is normally thought of as a poison, but even poisons have use. Arsenic is commonly used in pesticides, insecticides, plumbing, and a host of other uses. If you view arsenic as pure evil, then should be hoping that it has become more scarce, no?).

The top chart adjusts nominal arsenic prices to account for the general rise in prices since 1900 using a measure of the CPI’s broad inflation index. The bottom chart takes a different approach to adjust the arsenic data. It looks at the hourly wage of a typical manufacturing worker and asks how many hours would a typical worker need to work in order to secure a unit of arsenic (note that the 2009 data is my estimate based on monthly average spot prices for arsenic) 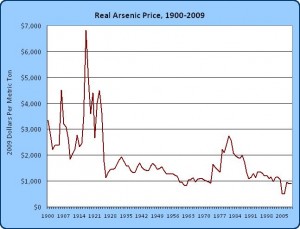 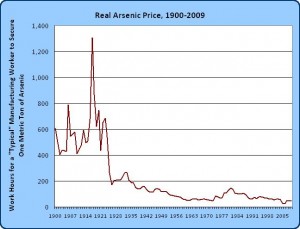 (note, I imputed the hourly wages for 1915-1918). Arsenic data from USGS, CPI data from BLS and wage data from Historical Statistics of the United States and BLS.

By any metric, the scarcity of arsenic is no higher today (in fact, it is much lower) than it was over 100 years ago, even as human consumption of tin has rocketed with economic growth and population growth. In real terms, arsenic prices have fallen by only 73.1% since 1900 from $3,340 per metric ton to roughly $900 per metric ton today. In 1900, it took a typical manufacturing worker 606 work hours to secure himself a ton of arsenic. Today, a similar worker would only have to work 45 hours to get it – a decrease of over 92 percent over the course of the century. And as I will show you, these are lower bounds for just how scarce arsenic really has become. Arsenic prices would have to rise to $12,109 per metric ton to make it just as hard for a typical worker to get it today as it was in 1900 (i.e. an increase of twelve times). Alternately, if arsenic prices remain unchanged, the typical worker would have his pay slashed to $1.48 per hour in order to be in a position that his 1900 counterpart was in. That’s a serious pay slash, even for greedy exploiting capitalists.

But this is just arsenic, right? Here is the previous entry in the series.