I recently learned about a successful group of communal socialists known as the Doukhobors. They are one of the longest lived sects of communitarians in history. Their group originated some 400 years ago in Russia, but they made their way to the US and Canada with the help of Tolstoy. The group was (is?) pacifistic and morally upright. They did not like it when governments took efforts to pass laws that violated their way of life.

The Doukhobors kept to themselves – each working very hard for the communal store and then sharing what they needed to get along. Sometimes they would have a fine crop to sell to market. They often sold it at below “market” prices, which of course made competing farmers upset. And when the community wished to buy something, they often paid “above” market prices for it. This behavior also upset people who found themselves being outbid for goods and assets they wanted. Sometimes governments passed laws preventing locals from doing business with the Doukhobors and governments sometimes took pains to force them to enroll their children in Government schools (are you starting to understand why we have government controlled schools? See next week’s posts for more details).

This was upsetting, of course. But many of the Doukhobors did not speak English and all of them were peaceful. How did they protest this unfair and unjust treatment? Why, the same way drunk frat guys celebrate on the weekends! They would attend the meetings, en masse, where these rules and laws were being discussed and voted on. They would sit there quietly. When their translator told them the measures had been passed, no violence or shouting ensued. Instead, all of the members would stand up and deliberately take off every last thread they were wearing (safe for viewing).

They would subsequently take to the streets in their birthday suits and parade through town quietly in protest. Apparently they would do this regardless of the weather. And then their final act of protest came soon thereafter as they set fire to all of their existing possessions, including their homes and farms, leaving nothing else to be further plundered, and then went on their way to locate in a place that would leave them alone. 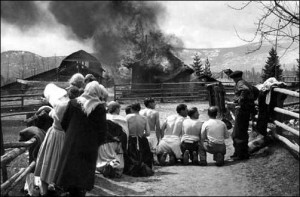 What would happen if I did this at my local school board meeting after they voted to raise a special tax levy because of the budget crisis they inflicted upon themselves? Too bad there is nowhere else to go that is any freer.