Remember the “Cornhusker Kickback?” Well, if you don’t that was the $100 million bribe of your money the President and Congress used to buy Senator Nelson’s vote. Why $100 million? Because that is an estimate of what the ObamaCare expansion of health coverage will cost that state’s Medicaid system.

I suspect this is an underestimate. State budget officers, higher education officials, and other folks that are into the state budgeting process very readily acknowledge that Medicaid as it exists is partially responsible for the awful budget position of the states. In almost every state Medicaid expenditures encompass the second largest portion of the budget and spending growth on Medicaid has far surpassed rates of inflation and state revenue growth. 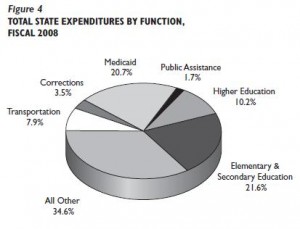 Yet what is a cornerstone of this “deficit neutral” multi-trillion dollar spending bill? It is to vastly expand the Medicaid program. And how can such a vast expansion of an expensive entitlement program be deficit neutral? Well, it can be if you only pay a fraction of the costs of it. You see, the way the Medicaid program works is that the federal government mandates that states administer the program, and in return each state gets a block grant from the federal government to cover only a fraction of the cost of the program. The rest of the funds must come from state general revenues.

In Nebraska, apparently the cost of the unfunded Medicaid mandate is “only” $100 million. I doubt it. If past estimates of Medicaid costs are good indicators of future ones, then this number vastly understates the burden imposed on Nebraska. Now, add to this number the cost to the other 49 states and suddenly we are looking at something on the order of tens of billions of dollars of spending that have to be made by law but that are not going to be paid for by the Federal Government.

If a private company tried to set up a shell corporation to pay some of its expenses, and only reported the expenses of its core corporation, it would be convicted of massive accounting violations, its executives sent to prison, and Board members paraded before Congress to explain how the let greedy capitalism get the best of them. Or imagine the same scenario in your family. Your parents force you to go to an expensive private college, and they give you money for half the tuition – because that is what the family can afford. For the parents of the family, such a move may perhaps be budget neutral – but tell that to the kid who has to work 35 hours per week at the Subway shop just to pay a quarter of the bill, and must take out a loan for the remainder.

More on the specifics of the Medicaid program by state in a future post.