Yesterday, without examination, we posted a look at what the Fed’s balance sheet looks like today. Here is what the Fed’s Balance Sheet looked like in the summer of 1996 (click it to enlarge). 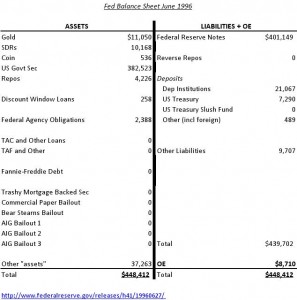 Not too much “fishy” stuff – this was at the tail end of the Latin American debt crisis, the S&L Crisis had largely passed and the trouble in Asia had yet to start brewing. My only few comments for the benefit of the readers are these:

Anyway, I hope you enjoy comparing the two. My fear used to be that today’s balance sheet would have lots of poorly performing assets on it so that the taxpayers would have to bail out the Fed … now it is … I am worried that these things will turn out to be good investments. And before you know it, the Fed will turn into nothing different than a giant hedge fund – the very thing it is supposed to (at least in the new la la legislation world) be monitoring, not engaging in.

Why? Because the profits of the Fed are plowed right back into the Treasury. Thankfully, we spend so much freakin’ money as a Congress that even if the Fed generates $50 billion per year in “profits” (from its monopoly position) that is a little more than 1% of the $4 trillion that the accountants in DC spend each and every year. Countries that rely on central bank profits for a larger portion of their fiscal spending (I hope this puts aside the notion that the Fed is an independent branch of government) are at a much larger risk of severe inflations than we are.