As the recent all-male coal mining deaths in West Virginia illustrate, a disproportionate number of men work in higher-risk occupations that are typically compensated with higher pay like coal mining (almost 100% male), fire fighters (96.6% male), police officers (84.5% male), correctional officers (73.1% male), and construction (97.4% male), BLS data here. A disproportionate number of women work in lower-risk, more comfortable and safer industries, often with lower pay to compensate for the more worker-friendly, indoor, comfortable, air-conditioned office environments, like Office and Administrative Support Occupations (74.5% female), Education, Training and Library Occupations (74.3%), and Healthcare (74.6%). These differences in work environments could likely reflect differences in “revealed preference” by gender – men prefer higher-paid, higher risk occupations, and women prefer lower-paid, lower risk occupations, in general and on average. It might not have anything to do with discrimination, and everything to do with differences in risk tolerances and risk-reward preferences.

To achieve gender pay equity, there will have to be an increase in the number of women in higher-paying, but higher-risk occupations like coal mining. That outcome will certainly reduce the gender pay gap, but it will come at a huge cost: sentencing thousands of women per year to certain fatal occupational deaths. Would closing the pay gap, if it also means closing the gender occupational death gap and exposing thousands of women to work-related deaths each year, really be worth it for women? 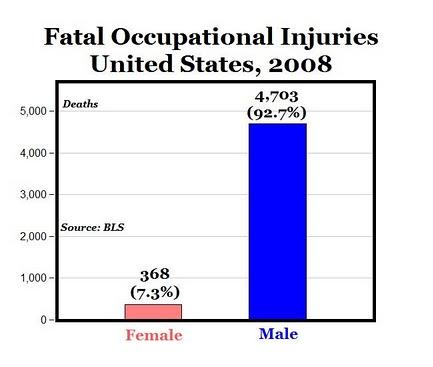 Or how about thinking about this another way. The article Perry sites is about “Equal Pay Day””

“The next Equal Pay Day is Tuesday, April 20, 2010. This date symbolizes how far into 2010 women must work to earn what men earned in 2009. Because women earn less, on average, than men, they must work longer for the same amount of pay. Equal Pay Day was originated by the National Committee on Pay Equity (NCPE) in 1996 as a public awareness event to illustrate the gap between men’s and women’s wages.”

Let’s rewrite that a little bit:

Or staying truer to the original point, perhaps this rewrite is in order:

“The next Equal Pay Day is Tuesday, April 20, 2010. This date symbolizes how far into 2010 women secretaries in Rochester, NY must work to earn what men women secretaries in New York City earned in 2009. Because Rochester women earn less, on average, than men New York City women, they must work longer for the same amount of pay. Equal Pay Day was originated by the National Committee on Pay Equity (NCPE) in 1996 as a public awareness event to illustrate the gap between men’s New York women’s and Rochester women’s wages.”

Silly, no?
All that would be required to understand this is a most basic understanding of supply and demand. If you are wedded to the idea that markets cannot possibly snuff out (some … all) discrimination, you would still profit from this understanding. A little reading of Becker would be nice, as would Juhn, Murphy and Pierce. There may be some unexplained discrimination out there, but if someone chose not to exercise his own (or his workers’ or his customers) taste for discrimination, then you could make a killing by hiring from the discriminated group. Do you mean to tell me that evil capitalists are super greedy in all aspects except this? That they are such awful people, that they would choose to forego making massive profits just to exercise their discriminatory preferences? OK, fine. Then be consistent when you wish to argue their greed elsewhere.
What’s going to be next? Equal Houseprice Day? Except it will be those will high house prices that complain about lower priced, but otherwise identical houses. For example, my 1900 square foot, 50 year old, split level home cost about $185,000 here in Rochester. I have massively high property taxes ($6,500 per year) as well as a nice view of I-490, and my neighbors’ equally stunning split level ranches. There are other 1900 square foot, 50 year old, split level ranches around the country with ocean views, low taxes, and pretty houses all around them. How awful that they do not have equal housing “affordability” as I do.