There is virtually no action to be taken by a business that could not be considered to run afoul of anti-trust legislation. Modern Anti-Trust is administered through two government agencies – the Justice Department’s Anti-Trust Division and the Federal Trade Commission. By the way the statue standing outside the FTC headquarters should give you an idea about what its real mission is. What is the difference between these agencies?

The Justice Department is supposed to deal with monopolies and business collusion. The FTC is supposed to focus on things called, “unfair trade practices” (read, if you are better at something than someone else, that is unfair). The Justice Department can only initiate anti-trust action by using the court system. The FTC on the other hand acts as judge, jury and executioner – in other words, when the FTC acts, it can do so outside of any formal court system and it has the autonomous power to shut down businesses and issue other directives and edicts.

Firms can take their cases to the higher courts to appeal decisions from either the Justice Department route or the FTC route. Here is an example of how anti-trust action usually works.

In 1937, the Department of Justice brought suit against Alcoa on 140 counts including charges of conspiracy, unfair treatment of competitors and excessive prices. The Justice Department got walloped in the TWO YEAR long trial (note that this was happening during the Depression – a really good way to encourage Alcoa and other producers to take risks and hire people!).  But Justice appealed the decision … and in 1944 won their case – a full 7 years after the process was initiated. And here is why the court ruled against Alcoa (via RW Grant):

Alcoa insists that it never excluded competitors; but we can think of no more effective exclusion than progressively to embrace each new opportunity as it opened, and to face every newcomer with new capacity already geared into a great origanization, having the advantage of experience, trade connections and the elite of personnel.

Let’s look at what happened to aluminum prices during the time that the government was crucifying Alcoa. 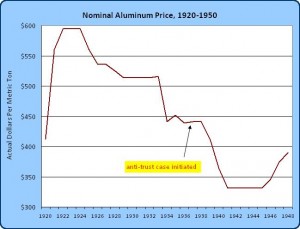 But those are nominal prices! In a world when prices tend to go up, we see aluminum prices falling in absolute terms. But at the start of the Depression there was a sharp deflation in the US – so perhaps the regulators were aware of this and were focused on the real prices of aluminum during this time? 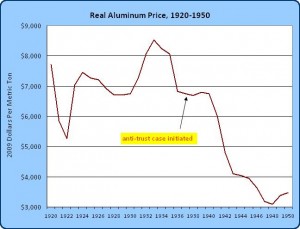 Well, that spike in 1933 does correspond to the massive bank failures and contraction of the money supply by 1/3. But even thereafter, the price of aluminum fell sharply. In other words, there is absolutely no evidence that consumers were being harmed by high aluminum prices at this time. In fact, it is funny to think about two things: