Well, saying anything that may possibly be presumed as a negative toward any public "servant" is a good way to do it. You'll be assured of your place in a lonely out of the way bar on Friday nights if you dare say anything untoward regarding the fire department. ;

Nothing makes me crazier than "Fill the Boot" campaigns. ; 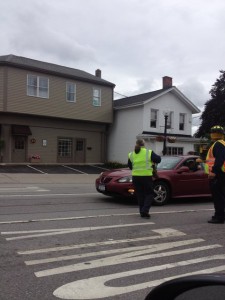 To be fair, these are the local volunteer firemen doing a campaign on behalf of the Muscular Dystrophy Association, and to be further fair, I am of the belief that our local public services are as well run as any I have seen in the places I have lived. But … here I am driving home from the supermarket on Monroe Ave, and coming into the village of Pittsford we have about a 60 car backup that extends over 3 blocks and takes about 4-5 extra minutes to get through. You may think 4 or 5 minutes is no big deal, but multiply that by the several hundred cars in each direction that were delayed and now we're talking a serious cost. ;

But maybe that is all for a good cause. Maybe. But I want folks to be consistent. I really do. Imagine if me and my students decided to do a fundraiser in the middle of Monroe Ave on a Monday afternoon that held up traffic and asked people to contribute to our ELFS program? After all, we (were/are) trying to raise money to help a student who is trapped in a public school find their way to a Catholic alternative. It would seem to be a good cause, no less worthy than fundraising for Muscular Dystrophy – yet I am 100% sure we would have not been permitted to do it. I am almost as sure that we would have been quickly escorted from the street if we tried it. Or what if we were not raising funds for a good cause but instead trying to sell some maps or buttons or hot dogs or lemonade to cars at the intersection in the village. I am sure the police would have stopped it immediately and fines/summons would have been written. So what makes the fire department any different than the rest of us? Or what makes Muscular Dystrophy so important that it should get the time for a "Fill the Boot" campaign and not perhaps the American Cancer Society? And what if any old organization wanted to make a contribution to the fire department in exchange for them using their "power" to stop traffic and fundraise?

And seriously, raising funds this way is far worse than having a Sallie representative ringing the bell outside the shopping malls at Christmas time. There is no way to escape the fundraisers, and the pressure to give in such a situation is not exactly what I would call non-existent (I did not give in case any of you are wondering). These sorts of things, rightly or wrongly, make me less inclined to support either the fire department or the charity they are representing. Pray, tell, what is so special about either of them that they get to do this? ;