Search
Menu
Categories
‹ prev next ›
2
It Must Have Been the “PR”EPA Clean Air Act
August 17, 2012 wintercow20 Economic Illiteracy

A former student of mine had the unfortunate experience the other night of trying to have a religious conversation about government and the environment. As expected, the person he was talking to argued that the EPA is the reason air quality is better today than in the past. Now, of course air quality was poorer in 1920 than it is today for a variety of reasons (think of why air quality in Beijing is not as good as in NYC), but prior to the National Environmental Policy Act of 1970 very little data was collected at the federal level (or any level) on environmental quality. To paint a clearer picture of what has happened to environmental quality prior to the EPA requires some elbow grease, if at all possible. I’ll present some of the data in bits and pieces over the coming days and weeks.

Since my student’s “friend” was invoking the Clean Air Act (1970, but really 1977 given the ineffectiveness of the earlier law), let’s look at air quality. Today’s picture is for the annual average of ambient (i.e. how much “sits” in the air) sulfur dioxide from 1962 to 1997. It comes from Indur Goklany’s Cleaning the Air. 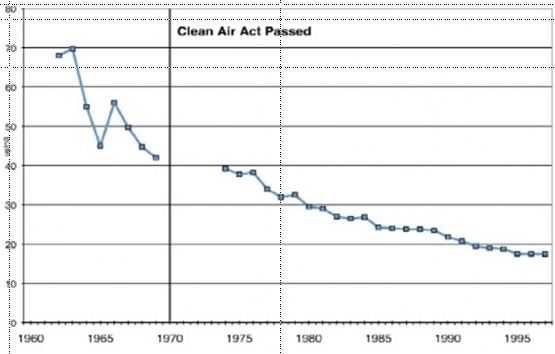 So from 1963 to 1970 alone there seems to have been a 40% reduction in average ambient sulfur dioxide. If you look out to 1977 when the Act with teeth was passed there was over a 50% reduction. Sulfur dioxide emissions were falling quite dramatically long before the EPA began operations. I am not arguing here why these reductions took place (nuclear power, some credit to the government for this?) just that they DID take place and had nothing to do with the EPA. We’ll look at some other pollutants and some other locations in future posts.