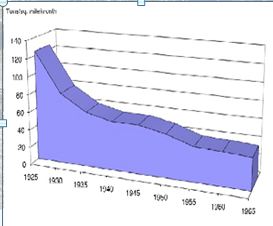 Sorry the quality is not better, it is from a bad scan on a bad scanner. I suppose the canned response to this is that the EPA encouraged global trade in steel from 1925-1965 and that all of the dust from steel production is now falling on some poor Chinese city. Kudos to readers who can report on the veracity of that particular claim.  Elsewhere in his work Goklany reports that 4 of the 5 major indoor air pollutants (the things that are still in the top 10 causes of death in poor countries) declined by 80% between 1940 and 1970. The 5th, nitrogen oxide, fell by 60% from 1940 to 2000.