Here is an excerpt from Ken Dryden’s book, the Game. Hockey fans would surely enjoy the book, but there many good life lessons in there as well. And then there’s this, which of course is only referring to the the NHL’s “stance” on hockey fighting (for the record, I am not a fan of fighting in hockey):

The NHL is wrong. The reports of Ziegler’s scouts notwithstanding, there is much visual evidence to the contrary.  But more to the point, the NHL is wrong because if Frued was right, anthropologist Desmond Morris is also right. As Morris believes, anger released, though sometimes therapeutic, is sometimes inflammatory; that is, by fighting, two players may get violent feelings out of their systems, or, by fighting they may create new violent feelings to make further release (more fighting) necessary. If Freud was right, the NHL is also wrong believing as it does that fighting and stick-swinging represent the only channels by which violent feelings can be released. Anger and frustration can be released within the rules, by skating faster, by shooting harder, by doing relentless, dogged violence on an opponent’s mind, as Bjorn Borg, Pete Rose, and Bob Gainey do. If Freud was right and anger released is anger spent, then a right hook given is a body-check missed, and by permitting fighting, the NHL discourages determined, inspired play as retaliation.

But Freud might be wrong. Anthropologist Richard Sipes thinks so. He has written that violence, instead of being a human potential requiring release, once released is learned and repeated, not cathartically purged away — in other words, violence feeds violence, fighting encourages more fighting. If Freud was wrong and Sipes right, the NHL is still wrong.

(wintercow: my emphasis on the following paragraph) The NHL theory of violence is nothing more than original violence tolerated and accepted, in time turned into custom, into spectacle, into tactic, and finally into theory. For years the league has argued the wrong-headedness of its critics, and for years it has missed the point. Surely it matters little any more whether hockey fighting is violence or vaudeville, release or just good practice. What matters is that fighting degrades, turning sport into dubious spectacle, bringing into question hockey’s very legitimacy, confining it forever to the fringes of sports respectability.

In a TV interview, Dick Cavett once asked John Cleese of England’s Monty Python’s Flying Circus the connection between his training as a lawyer and the group’s outrageous, nonsensical humor. It was intended only as a set-up for a quick, witty reply; but Cleese answered that there was a connection, indeed a close one.

For though appearing random and nonsensical, he said, the group’s humor in fact derived from an outrageous initial premise, but a premise then logically followed, step by step as a lawyer might, to its outrageous but logical end. So if, as in Monty Python and the Holy Grail, a knight, both arms cut off in a duel, continues to duel, it follows he must do so either by kicking or biting his opponent. The result, if nonsensical, is only because the original premise made it so.

Often criticized for lenience in dealing with league violence, Ziegler and NHL executive vice-president Brian O’Neill in fact have acted entirely consistently with the league’s own understanding of violence. Unfortunately, trapped in their own myth and intending no humor, they too begin with an outrageous premise.

Ken Dryden graduated from Cornell. Is that an African Swallow or a European Swallow? 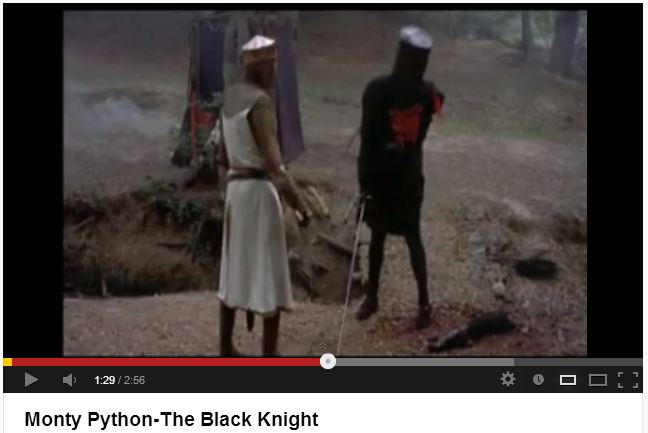