Search
Menu
Categories
‹ prev next ›
4
Nothing Like the Smell of a Crackling Fire on an Icy Winter Evening
March 4, 2013 wintercow20 Environment

My students in science tell me that our sense of smell is perhaps the strongest inducer to memory than of any of the five senses. I tend to agree. There are some smells that are so ingrained in my head that I cannot help but be taken back to when I first remember being exposed to them. But of all of those smells, perhaps there is nothing more pleasant and evokes more fond memories than the smell of a crackling wood fire on an icy winter evening. It perhaps started when I was a Boy Scout, having to sleep in a bottomless canvas tent on ice in the dead of winter, just dreaming of warm cocoa and oatmeal that our warm scout leaders were preparing for when we “awoke” (no one quite sleeps in those conditions). It’s a smell I enjoyed last night as I trundled home around midnight and one of my neighbors must have been warming by their hearth. 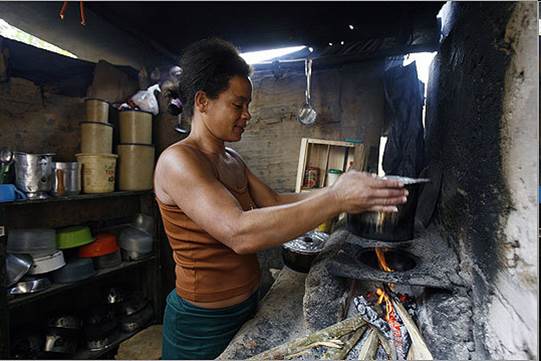 Here is what the above World Health Organization Report says about this:

Indoor smoke from solid fuels More than half the world’s population still cooks with wood, dung, coal or agricultural residues on simple stoves or open fires. Especially under conditions
of limited ventilation, solid-fuel use leads to high exposures to indoor smoke and large associated health risks, particularly for women and children. Indoor smoke from solid-fuel use contains a range of potentially harmful substances, from carcinogens to small particulate matter, all of which cause damage to the lungs. Indoor smoke from solid fuel causes about 21% of lower respiratory infection deaths worldwide, 35% of chronic obstructive pulmonary deaths and about 3% of lung cancer deaths. Of these deaths, about 64% occur in low-income countries, especially in South-East Asia and Africa.

And this is surely not limited to poor countries. A very quick search of PubMed should be enough to convince you of this. You will find that smoke from wood fires is as toxic as the exhaust from vehicle tailpipes. You will find that inhalation of wood smoke produces similar impacts on your lungs as smoking cigarettes. You will find that smoke from wood fires leads to significantly more infection and other illness in children than for children not exposed to wood smoke. You will find wood smoke to be highly carcinogenic. Here is one of the many studies I pulled up to examine this. Couple the over 1 million deaths (and many more sicknesses) that occur in poor countries with the thousands of people who suffer lung disease, ear infection, and cancer from exposure to wood smoke in rich countries like the US, and it turns out that wood is among the most serious killers on earth.

People claim that burning wood is carbon neutral, because the dead trees would decay and release the CO2 anyway. But harvesting of trees surely contributes to climate change due to the impact on land use as a result of the harvest, and the actual harvesting activities themselves.

And we living in rich countries cannot be said to “need” to use wood for any purpose anymore. We have plenty of natural gas (cleaner). We have plenty of ways to generate electricity to distribute to people’s homes. The burning of wood in America is clearly a frivolous indulgence. And it’s a frivolous indulgence that kills and maims Americans by the thousands. My neighbor has been burning fires all winter and my son and I have battled coughs and colds all winter. Surely my neighbor’s smoke did not help this. And believe me, the smoke even gets in our house. It has been estimated that 70% of indoor air pollution comes from outside the home.

So, I’ll start taking “E”nviros seriously when they propose a ban on the burning of wood. And then I’d like to see the wood gestapo follow up with enforcing this. The problem of wood even here in America is far more serious than most risks that the “E”nviros claim to care about. It surely is a more serious threat to our health than fracking. It is surely a more serious threat to our health than whatever possible impacts Climate Change will throw at us. It is a problem that afflicts both rich and poor in America, so there shouldn’t be the same “indifference” that folks claim happens when some tragedy only befalls the poor. And since wood is burned from a large variety of sources, even here on my block, economists would argue that it is too costly for me to negotiate with all of the people who are hurting my lungs and eyes, so that Coasean bargains are ruled out. And remember the burning of wood causes other problems too. When I camp in the ADKs, I see pickup trucks on the Thruway piled up with wood taken from other places and brought to the ADKs and vice verse. This is a lovely way to transmit awful pests like the Emerald Ash borer beetle and other diseases.

So how come in all my time being around the “green” community, scarcely a mention of wood has come up? I have my own thought, but I’d like to hear yours. I do hope you understand that I am not serious about banning wood. Though maybe I should be in favor of wood burning standards at least for fireplaces and stoves in homes in densely populated communities. This is something that the local zoning and inspection czars have not gotten their paws on yet, strangely.