Saw this while out and about this weekend: 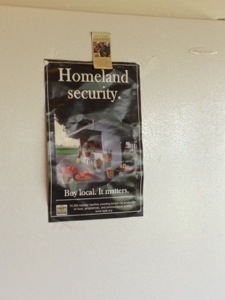 Saw some better ones but the camera was not with me. For a long time we’ve been trying to focus people’s attention here at TUW on separating intentions from outcomes, on not getting caught up in emotion and to use the tools of logic and reason, and of course this has been to no avail. Symbolism is all that really matters.

The act of slapping a LEED plaque on a building matters, not whether it actually conserves resources. Sticking a pretty logo on a recycling bin matters because it shows you care, because it shows you are doing your part, that you put people and the planet over profits.

And the folks that stifle analysis and reality by saying this symbolism matters, I think, put themselves in a terrible bind when they say that symbolism is important. Why? Well, what are they to think about companies like British Petroleum which spent tens of millions of dollars on an ad campaign touting its green credentials all the while spending virtually nothing on green energy (well less than 1/2 percent of its spending) and who owns most of the rights to Prudhoe Bay drilling? If after all the symbolism matters, them please do tell me on what grounds any “E”nvironmentalist can say that BP or any oil company is bad? They all “want” to be green. They all say they care about the planet. How is that in any way different than slapping a LEED tag on a building that is not actually green?

And if evil planet paving people like myself pronounce that we care about the planet, and even buy some Fair Trade coffee to prove it, on what grounds am I to be dismissed but the inane curbside recycling programs and green building standards and many alternative energy programs that are certainly not green to be embraced?

What if I believe that paving rainforest is actually green? How would the “symbolists” argue against it? I can paint the pavement green and I can make it drain well and do all sorts of good looking things. If we are not to evaluate the object on its actual impact then how does one argue that some symbols are “greener” than others?

You can’t of course. And you can’t just say we all have a right to our opinions. On matters of fact, we actually don’t.