Remembering that I have retired from blogging (meaning that the post below should be many pages long including a lot more research, most of which I have tucked into various class presentations anyway), here was a lovely article that I had posted to my Facebook timeline the other day.

Perhaps I am being too harsh. The article however is about 10 American Foods that are Banned in Other Countries. Chock full of sciencecy goodness. My favorite in the list is:

” If you live in the US and drink Mountain Dew and some other citrus-flavored sodas and sports drinks, then you are also getting a dose of a synthetic chemical called brominated vegetable oil (BVO), which was originally patented by chemical companies as a flame retardant.”

Water is a flame retardant too. And “natural” water is infested with all kinds of things that used to kill Americans and still kill all kinds of people around the world today. In fact, if one were to trek up Mt. Esther (a little sister of Whiteface) had you not filtered the water coming from all-natural French’s Brook, you would probably be in a hospital emergency room to treat the problems of Giardia and Crypotsporidium. And you would have contracted that not because humans were dumping the stuff down into the brook.

Other sciency goodness in the article includes the overarching theme that if something is banned somewhere then it is bad for you, or the opposite conclusion that if something is not illegal then it is OK? For fun, make up the list of things that are legal in Europe and see if you’d consider all of them safe. You know, household bleach isn’t banned either – and that stuff surely will kill you if ingested in sufficient quantities. And as far as banned foods – my parents raised me strict Catholic – on Fridays during Lent I cannot eat meat. So does that mean that meat is bad for me? After all, thousands of studies on diet link the ingestion of “too much” meat to heart disease and all kinds of other maladies. Does the banning of meat by Catholics mean that non-Catholics who eat meat on Fridays should be terrified?

Notice how many times the words, “can, might, maybe, thought to …” appear in the article. And notice how many sciency good organizations are being relied upon. It’s sort of like me reporting, “The American Economic Association reports that people who do not take an economics class during their lives might possibly have less happy existences after the age of 40.” Sciency goodness. And of course, that article above doesn’t of course stand to profit in any way from the widespread adoption of the ideas in there. Just reporting, honestly of course.

Meanwhile, we will just duck our heads and not let anyone know about these biased corporate funded studies …  http://repository.upenn.edu/cgi/viewcontent.cgi?article=1012&context=psc_working_papers (chart below from that paper, I know – incidence data is what we want, but my students are going to be looking that up, so can’t give away answers yet) 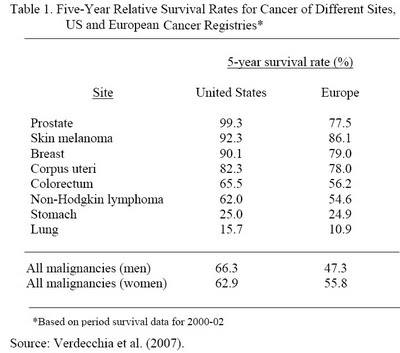 And ignore of course the cancer data we showed in class. You can find most of it here at the US Center for Disease Control Data resource. Have fun perusing it. A final interesting observation perhaps is to observe the variablility in outcomes in the US alone:  http://apps.nccd.cdc.gov/uscs/cancersrankedbystate.aspx and ask why the rates in Kentucky are so high, but right next door in Indiana are so low. Is the variability in those rates larger or smaller than US-Europe difference? Even if the article above is 100% sciency good, how much additional cancer risk (they report that, right?) do all of these nasties represent and how do they compare to the variation across (or even within) states in the US? And so on.

As I said at the start, it would be worth going through the epidemiology AND economics of each of those 10 claims, but I’m retired.