One of my favorite aspects of discussing environmental economics is the typical “bait and switch” or simply change of direction whenever environmental cost-benefit figures come up. For example, I’ve been called all kinds of names for things like this and have had it said that, “well, umm, ehhh, ekkk, well, there’s more to the world than economics.” On this Earth Day I share with you one of my favorite illustrations of the mirthiness that an uncritical and political assessment of environmental economic conditions has become. It’s from a few years ago but it ages well. Here the Mackinac Center finds, by simply adding up all of the subsidies that GM gets directly for producing the Volt and for he subsidies that its suppliers get, and so on. The numbers indicated that each Volt sold (I suppose with economies of scale this would fall) came equipped with a quarter million dollar of benefits from the taxpayers. Nice!

Now of course, the Volt is going to save the world, but leave that aside for a moment. When GM saw the article, did they correct the analysis? Did they point out that some of the subsidies no longer were being paid or were incorrectly calculated? Did they add some context about carbon emissions saved per dollar or something of the sort? Nope. Nada. Not a bit. Their response is sadly classic:

Greg Martin, director of Policy and Washington Communications for GM, wrote in an email, “While much less than the hundreds of billions of dollars that Japanese and Korean auto and battery manufacturers have received over the years, the investments provided by several different Administrations and Congresses to jump-start the country’s fledgling battery technology and domestic electric vehicle industries (not just specifically for the Volt as Ford’s offering will also use LG Chem batteries and Fisker will use the A123 system for example) matches the same foresight and innovation  leadership that other countries are exhibiting and which America has historically taken pride in.”

Martin added that the Mackinac Center’s math was “simple and selective.” However, he offered no data or specifics to support his assertion.

No need to go on a rant today. Here is what was just installed at our town community center: 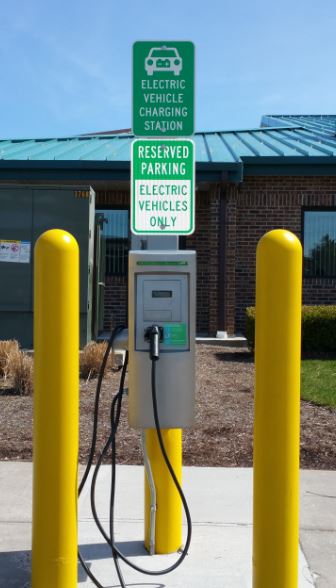 Of course the electricity is free. That must be nice.

My snark in my town doesn’t work too too well because most of the power comes from the Municipal Power Company which purchases electricity, mostly hydro power, from the state. Nonetheless, it’s fun to commend Volt owners not just for being rich, not just for getting thousands in subsidies, but also for driving a coal powered car.