Search
Menu
Categories
‹ prev next ›
0
Anyone Have a Good Joke About Volkswagons?
September 22, 2015 wintercow20 Environment

Suppose World Total GDP, which now stands at apx. $70 trillion, grows at about only 2% per year (ignoring population for a moment). This means that over the next 100 years, GDP will double approximately three times (use the rule of 69.3!). If you think total growth will be 3%, not at all unlikely, it will double four times over this period. Therefore, by 2115, total world GDP may be something like $560 trillion in real 2015 dollars. That’s a lot.

Demographers disagree on what world population would be by then, but I’ve seen estimates that it can peak at 9 billion by midcentury, or take longer to peak and hit 11 billion by the end of the century. Take the conservative 11 billion number. If that is the case, then average World GDP per capita in 2115 might be expected to be something like $51,000 – which means that the typical person around the world would enjoy a living standard similar what a current American enjoys (and note too that this clearly is an understatement, because that person in 2115 would get to consume $51,000 worth of 2115 stuff, and not the old-fashioned stuff we “suffer” with here in 2015).

Now, one point we’ve made in the past is worth remembering as we go through this exercise. It’s that we probably can’t get massive economically costly global warming unless global output grows a great deal. However, if global output grows a great deal, then dealing with even very serious problems 100 years out when world output is creeping up on a quadrillion dollars (inflation adjusted folks, that is equivalent to having quadrillion dollars today) is really not going to be a big deal (cue the threats to burn down my house and flood my backyard …).

I will post a paper shortly about the models and estimates dealing with the expected economic costs of global warming, but for now I wanted to simply summarize one of the main “known” results. That if the globe warms by 2.5 degrees centigrade over the next 100 years (i.e. an additional 1.7 degrees above what we’ve gotten already), then GDP 100 years from now is going to be smaller than it otherwise would have been.

What has been the REAL growth rate of the world economy, by year, in recent history? 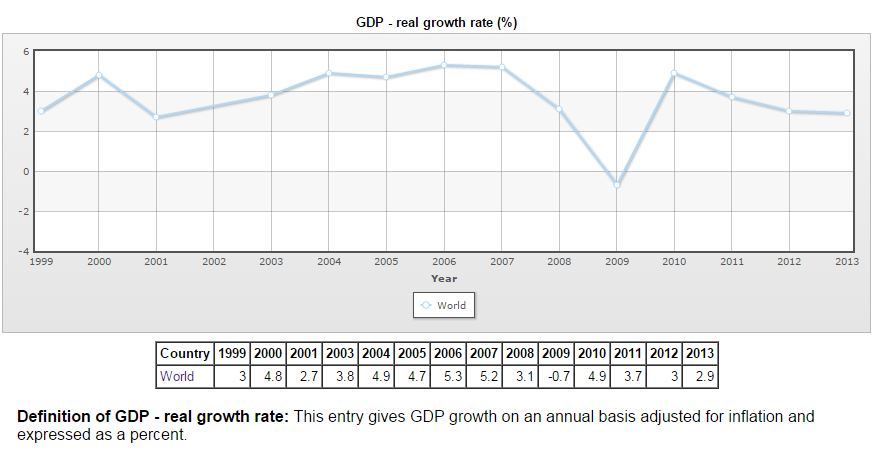 This is an average growth rate of 3.66% for the last 15 years. Check out the per capita estimates too. What does this result mean? It means that if we get the global warming we expect, and we do not make major advances to do anything about it, then the TOTAL GDP in the year 2115 would be 2% smaller than it would have otherwise been.

How much is that? Well, I could scare you and report something like, “If the world doesn’t act strongly now, global warming can cost $11.2 trillion by the end of the century.” That sounds scary. But put that in perspective.

As we’ve argued before, the distribution of benefits (yes) and costs of global warming will be uneven, and the majority of costs are expected to fall on poor countries and/or those located in the tropics. Of course, it is those very countries that would stand to see their resilience to global warming increase most rapidly as incomes grow. Further, making this point does not mean “do nothing”, it merely gives a sense for the expected/known damages.

For fun, you might want to consider two thoughts:

What is most striking is that what is written up here should be completely independent of what you think of climate science and the possibility of future warming. This merely takes what the “consensus” is telling us about likely rates of warming and physical impacts of that warming and applies what we know from economics to evaluate it. In other words, if you were serious about discussing global warming and dealing with the problem, there should not be a high correlation between what your belief is about the science (i.e. more skeptical or more alarmist) and your acceptance of the forgoing information. However, I suspect that the reaction to the above would split along “party lines” here too, which is utterly depressing. So call me a name if you wish, but I simply cannot see that global warming poses any particular problem for humanity, especially since we seem to not only tolerate, but support actively, far more serious burdens to our lives on a daily basis today, when we are considerably poorer than we will be way out into the future. And yes, I understand that there is a small chance of a really, bad thing happening. That’s for another post for another day – but the gist is to treat that like any other existential risk we face, like death from total nuclear war, AI gone mad, massive viral outbreaks, etc.