I am a fan of consensual capitalist acts. It would be wonderful if many more transactions people had a chance to engage with in their lives were ones where both parties had some agency about whether and how to enter such transactions. Sadly, and I am going to sound like some dour anti-capitalist nutcase now, I think that a larger and larger share of the engagements we have in this world are not consensual.

At the risk of sounding hyperbolic, I feel like I am being “capitalistically molested.” The picture below gives yet one of many new examples: 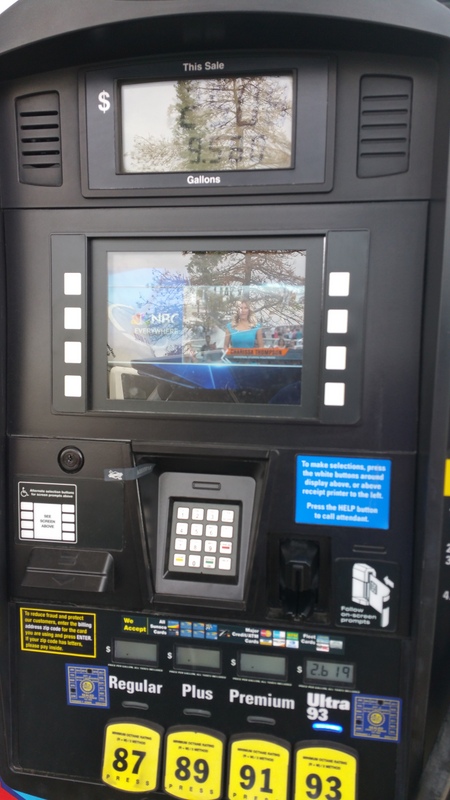 This was taken at a Sunoco station near by home in Rochester. The pump is a new one (incidentally, the third new one since I moved here). Notice the brand new television screen blaring at me. I cannot silence the screen, lower the volume, pause it, etc. As I stand there pumping gas (of course, we have to hold the pump handle because our betters think that allowing those neat little clickly devices that hold the pump for us is too dangerous), now no longer am I forced to just look at some print advertisements for Kool cigarettes and some two day old Churros in the nearby shop, not only am I inundated with inducements to secure a Sunoco credit card or to join some such gasoline club … NOW … I have to deal with the bleating of NBC news. God knows what NBC news paid to the Sunoco stations to be able to have the ear of every single driver (and passenger, these things are LOUD) of an automobile in America.

But I did not ask for this. There are so few places in this world now where you are not inundated with noise, advertising, banter, and all manner of distractions. I used to actually like some gas stations because while filling my car it was a few minutes of peace and quiet to have thoughts to myself as I listen to the droning of cars along the nearby expressways. Now, not even that place is “sacred.” Sunoco did not advertise that they would be adding this television feature, I also did not tell them I wanted it. Yet here we have it. That does not, to me, seem like a consensual capitalist act.

For now, I have the option of finding other gas stations that merely allow me to quietly pump my gas. Some of those have more ads and radio noise than others, and I will choose the quiet ones. But how long until the “force of competition” requires that ALL gas stations have these distractions? (And let’s not talk about the quality of the content on NBC news). So long as there is some form of easy exit opportunity from an engagement I will consider the engagement sort-of consensual, but boy oh boy, there seem to be a decreasing number of time-places where a truly consensual act is taking place.

One of the nice parts of the modern TV and radio scene is that you can structure your life to be more consensual than in the past. I watch far less media today and listen to far less radio today than in the past – but almost everything I watch is what I select, and almost everything I do is devoid of commercial interruption. As soon as the media I am enjoying veers off into non-consensual land, or non-interesting land, I find something else to do and/or drop the media relationship entirely.

I wished it were as easy to structure our physical reality in the same way we do it for our media and online lives.