When it comes to the environment, we are asking how we can maintain a healthy environment with our continuing human activity? Emissions projections U.S. Energy Information Administration predict that we will likely continue to pollute at an exponentially increasing rate as the years go on.

But hey, it’s an actual link to the US government, so it must obviously make the point. Except it doesn’t. 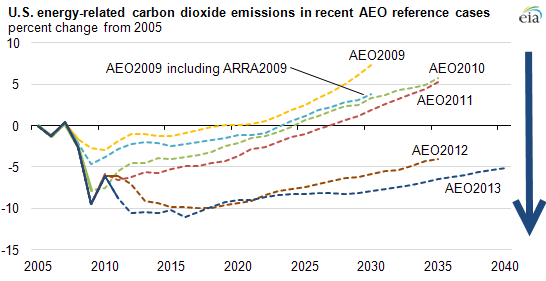 Projections for U.S. energy-related carbon dioxide (CO2) emissions have generally been lowered in recent editions of theAnnual Energy Outlook(AEO), the long-term projections of the U.S. Energy Information Administration. The lowered projections reflect both market and policy developments that have reduced recent and projected growth in energy demand and its expected carbon intensity. The chart presents projected energy-related CO2emissions from AEOs issued since 2009 in terms of changes relative to emissions in 2005, a commonly used comparison year, particularly with regard to mitigation targets.

EIA’s AEO reflects laws and regulations in place at the time the analysis was performed. New policies are incorporated in subsequent editions of the AEO as they are put in place. For example, updated fuel efficiency standards for light-duty and heavy-duty vehicles were incorporated in AEO2012 and AEO2013, tending to lower CO2emissions relative to earlier projections. The CO2projection in AEO2013 generally falls below that in AEO2012, and remains more than 5 percent below the 2005 level throughout a forecast horizon that for the first time extends to 2040. However, near-term expectations of industrial growth in response to the availability of low-priced natural gas result in somewhat higher projected levels of CO2emissions at the end of the current decade than in last year’s outlook.

This defiition was particularly excellent:

Sustainability is the ability for something to sustain itself over time

YMMV on where to go with that. But clearly by that definition, …