Here in the Sugarlands Visitor Center at the Great Smoky National Park we see: 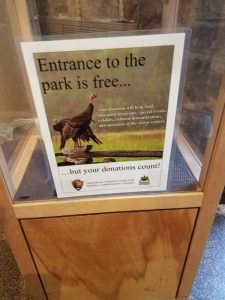 I love that there is a nearly empty collection box. The park tries to collect small amounts of fees by selling trail maps and wildflower and wildlife guides, but at $1 a pop that is probably barely enough to cover the printing costs for most of these. What is startling about the “free” park is of course that it is no such thing. The park requires an enormous amount of resources not just to maintain roads and the usual park infrastructure, but there also requires an extensive amount of ecological conservation work that most visitors will never see nor care to think about. The park itself claims to run on a budget of just under $20 million per year (for perspective, my University’s budget is in the $2 billion per year range) and covers an area of about 750 square miles across two states.

Any of you who read about parks and recreation have heard the noise that our National Parks are “woefully” underfunded, that there are decades of deferred maintenance backlogs, that they are threatened by overuse and so on. And nominally, all of that is true. But consider that the Great Smoky National Park is THE MOST visited park in the entire national park system … and it’s not even close. It gets almost triple the amount of visits as the Grand Canyon!  From talking to a ranger, he thinks they get over 11 million visitors per year at the park.

And they charge each of these visitors … zero. Mind you, most visitors who come there are spending an inordinate amount of money to get to the park and to stay and eat and recreate near the park. If you’ve ever been to Gatlingburg and Pigeon Forge, you know what I mean (I’ll leave that rant for some other time). Needless to say, if a family of four is staying at a decent place near the main entrance to the park (there are other less busy entrances, I was over by Wear Cove) and they eat out once per day and they avail themselves of some of the absurd Vegas-like places, they are dropping an easy $2,000 just to be there. Yet, to “ensure access to all” the park remains free. I spend some of the most glorious recreational days of my life in the park this past week and paid zero dollars for it. Compared to everything else I was doing, it was worth well north of $500 to me.

So, let’s take the 11 million visitors. Even a nominal fee of $2 per visitor, which is less than ANY cup of crappy coffee served down there, would fund the entire park for an entire year. Given the fact that a family of four going to play mini-golf costs like $60, or a mediocre dinner out at any of the zillion kitchy places runs into the $100+ range for even the most basic of food, it is not unreasonable that a week’s access via car to the park should cost something along $100. If each individual visitor paid $100 (go look what Dollywood costs), then the annual revenues to the park would be $1.1 billion. That is well over a quarter of the entire national park budget (I mean for the entire system) for an entire year.

The idea that “your” National Parks are underfunded and falling apart is flatly absurd. Like almost every other aspect of our dysfunctional government, the “free” National Parks are like cheap candy given to shut the kids up on a long car ride. The reality is that even with no changes to how the parks are managed (and there are myriad changes that ought to be made), the system is entirely capable of taking care of itself and flourishing. We are the richest country in the history of the planet, and we seem incapable of getting something like this done. Yet folks seem to dream that we have both the political will and ability to do anything more complicated? Please excuse me while I go take a hike.