Search
Menu
Categories
‹ prev next ›
5
We Are All Going to Starve To Death in 38 Years
February 18, 2010 wintercow20 Resources

Look at what has happened to the scarcity of phosphorous over the past 100 years.

As the global population exceeds 6.6 billion people, the need to feed the ever expanding population has placed an increased burden on the agricultural industry.  Technological advances in farming and irrigation have streamlined food production, yet there is one fundamental item necessary for commercial farming to produce food; fertilizers.  Commercial farming has drained fields of their naturally occurring minerals necessary for healthy crop growth.  In order to ensure bountiful harvests, farmers must supplement the soil with fertilizers containing nitrogen, potassium, and phosphorus.   Of these minerals, phosphorus is absolutely essential to crop development such that the US Geological Survey states “there are no substitutes for phosphorus in agriculture” (Phosphate Rock, USGS).  With current trends in phosphorus consumption (wintercow: and prices), at first glance it seems that we will run out in the next couple of decades!

The top chart adjusts nominal phosphorous prices to account for the general rise in prices since 1900 using a measure of the CPI’s broad inflation index. The bottom chart takes a different approach to adjust the phosphorous data. It looks at the hourly wage of a typical manufacturing worker and asks how many hours would a typical worker need to work in order to secure a unit of phosphorous (note that the 2009 data is my estimate based on the World Bank’s Commodity “Pink Sheets”) 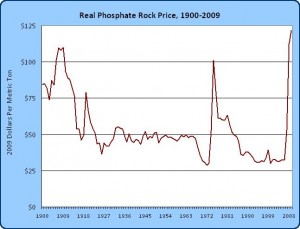 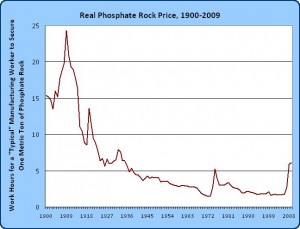 (note, I imputed the hourly wages for 1915-1918). Phosphate data from USGS, CPI data from BLS and wage data from Historical Statistics of the United States and BLS.

With the recent spike in phosphorous prices (they’ve since come back down below $100 per metric ton) it would appear that phosphorous is getting more scarce. And since it is essential for feeding humans, maybe we are that much closer to starving. But are we?

The scarcity of phosphorous is not much higher today (in fact, you will see that it is really much lower) than it was over 100 years ago, even as human consumption of phosphorous has rocketed with economic growth and population growth. In real terms, phosphate prices have increased by 44% over the course of a century from $84 per metric ton to $122 per metric ton (that is an average over all of 2009, the current spot price is now below $100).However, this is examining phosphorous prices as compared the the general rise in all prices as captured by the consumer price index.

What about the real economic burden of securing phosphorous? In other words, what would we have to part with today in terms of work effort as compared to the past? In 1900, it took a typical manufacturing worker 15.3 work hours to secure himself a ton of phosphorous. Today, a similar worker would only have to work 6.1 hours to get it – a decrease of over 60.3 percent over the course of the century. And as I will show you in a future series of posts, these are lower bounds for just how much less scarce phosphorous  really has become. Phosphorous prices would have to rise to $306 per metric ton to make it just as hard for a typical worker to get it today as it was in 1900. Alternately, if phosphorous prices remain unchanged, the typical worker would have his pay slashed to $7.93 per hour in order to be in a position that his 1900 counterpart was in.

Here is the previous entry in the series. What follows is my student Andy Bowman’s analysis of the phosphate data, as well as trends in its consumption and production. Julian Simon would be proud!

In 2008, the world mined 167,000,000 metric tons of phosphate rock, approximately 1% of its reserves.  According to this data, the world reserve will run out in 96 years 1 month and 22 days; February 22nd, 2105.  Last year, the United States mined 30,900,000 metric tons of phosphate rock.  Neglecting to account for yearly growth in consumption, the US will run out in 38 years and 10 months (Phosphate Rock, USGS).  Further fear has been sparked by the price of raw phosphate rock skyrocketing to all time highs in 2008.  Historically, phosphate rock prices have hovered around $45 (2008 USD) in the US.  In the late months of 2007, a decrease in production and increased demand caused phosphate rock prices to increase rapidly, peaking at $113 in the US and over $400 on the world market (Statistics, USGS; World Bank).  This massive spike in prices and apparently small supply left has been taken as a sign of the human race’s imminent destruction.

Granted, there may be a time when we stop discovering new caches of phosphate, and we slowly chip away at the reserves available to us in the ground.  Even then, we still will not run out of phosphate.  There still exists, currently, 32 billion metric tons of phosphate rock that has been deemed inefficient to extract for use, either due to the inability to access the mineral or the inability to extract phosphorus from the raw rock.  When, and if, there comes a time where usable phosphate rock becomes increasingly scarce, money will be diverted to researching new technologies to improve the efficiency of mining, extraction, and purification methods such that we will be able to utilize all known phosphate rock deposits.  The absence of large scale research being done right now also indicates that running out of phosphate is less of a problem than is claimed by some Doomsday theorists today.

One assumption has been made that is crucial to the above argument; phosphorus is a non-renewable resource.  The widely accepted definition of a non-renewable resource is a resource which gets produced by nature at a rate slower than that of human consumption of that resource.  This definition does not pass the “smell test.”  Using this definition, there are only four renewable resources; air (wind), water, solar energy, and geothermal energy.  This means, every other resource is non-renewable!  Resources used in their pure elemental form, such as copper, tin, aluminum, iron, lead, and phosphorus are considered non-renewable.  This might make sense; the planet is not creating large amounts of these elements (The number of atoms of a certain element produced by radioactive decay is negligible when looking at the entire supply of atoms of that element on the earth).  But when humans use these pure elemental resources, the elements do not change.  When phosphorus is used, it doesn’t get broken down into its protons, electrons, and neutrons.  We do not render that phosphorus completely unusable as we do when we consume fish and trees (this is somewhat untrue of uranium, hydrogen, and helium atoms used in nuclear fission and fusion).  When we use phosphorus, it is absorbed from the soil into plants or washed into the ground water.  Those phosphorus atoms are still there, and they are still phosphorus atoms.  They are just present in a form that is undesirable for us to use, mainly due the extremely high costs of recollection.  Thus, if we do not break down phosphorus into its base substituents and render it completely unusable, then we are not truly consuming the phosphorus.  With this realization, phosphorus cannot be classified as a non-renewable resource.  The classification of phosphorus as a renewable resource accounts for the fact that atoms of phosphorus are still present on the Earth, just not in a form that is useful for us to use. If there comes a time when we stop discovering new phosphate rock deposits and the remaining deposits are mined, it will become increasingly costly.  As these costs rise, there will be diminishing returns to the amount of phosphate mined, thus providing an incentive to recycle phosphorus.

Phosphorus can be extracted from any living or formerly living organism (animals, plants, bacteria) and many other sources (runoff from current mines and water purification plants).  In 2004, the EPA funded a University of Cincinnati study into the use of municipal human waste as a renewable source of phosphorus (Oerther).  The study developed an enhanced biological phosphate removal (EBPR) reactor that was able to remove 90% of all phosphates from human waste.  If EBPR reactors are retrofitted into each waste treatment facility nationwide, an estimated 8.75 million metric tons of phosphorus could be recovered.  Current technology enables the yield of approximately 30% usable phosphorus from raw phosphate rock (Kouloheris).  Of the 30.9 million tons of raw phosphate rock mined in the US in 2008, approximately 9.27 million tons of usable phosphorus was recovered.  Implementation of EBPR reactors would therefore eliminate 94% of the US’s current dependency on raw phosphate rock.  This would allow the current US reserve of phosphate rock to last over 2000 years!

Keep in mind these are the results of a single study.  There are many other ways to reduce our dependency on mined phosphorus.  As previously mentioned, new technologies could increase the purification yield from raw phosphate rock.  Other methods to reclaim phosphate could come from the purification of river water containing runoff from commercial agriculture.  In a report published in 2005, the EPA estimated 150,000 metric tons of phosphorus flowed through the Mississippi River alone (Aulenbach).  Phosphorus reclamation from major rivers, lakes, and the Gulf of Mexico holds untold potential.  Still yet to be explored is the potentially most significant method for increasing phosphate supplies; oceanic mining.  Currently, phosphate rock is mined from conventional deep Earth and open pit mines.  These deposits consist mostly of marine sedimentary phosphates which were created millions of years ago when the oceans covered the majority of the Earth’s surface.  What has remained relatively unexplored is the possibility of deep oceanic mining of similar sedimentary phosphate deposits.   The surge of phosphate rock prices in 2008 led to many marine mineral survey companies to begin obtaining permits for further exploration into these underwater deposits.  This has led to the identification of large deposits off the coast of Peru and Namibia (Swanepoel).

When will these recovery efforts be implemented?  No one person or firm will dictate with omniscient foresight when the exact time to begin recycling phosphorus; the market will signal the producers when to begin.  As phosphate rock becomes increasingly difficult to mine, the cost of doing so will increase dramatically.  When the time comes that it is cheaper to recycle phosphorus than it is to mine new raw phosphate rock, a shift from mining to recycling will be observed.  Each independent, profit seeking firm will make that decision for itself when doing so is in its best interest.

In spite of the prophecies foretold by Doomsday theorists, we will not all die in the upcoming decades due to a food shortage caused by the inability of commercial agriculture to fertilize and subsequently grow food. Current trends in phosphate rock discoveries show that twice as many metric tons of phosphate are discovered each year than the world consumes.  This makes it impossible to run out of phosphorus.  Even if these discoveries ceased to be made, the market will foster a transfer from the mining of raw phosphate rock to the recycling of current supplies.  With these recycling efforts in place, we will never run out of phosphorus.