In any case, how has the Keynesian apparatus held up over time? I’d argue that rather than government spending stimulating during recessions and dampening during expansions, government spending has been a major source of instability. On its face this should not be all that surprising. By the time politicians get the data on private activity, and by the time the legislative process takes its course, the stage of the business cycle is almost certainly changing. In other words, the difficulty in obtaining just-in-time information and the long lags in the legislative process virtually guarantee that fiscal efforts to mitigate business cycle movements are like a drunk man groping in a closet for his lost keys.

Below is some simple data to begin to make my point. The BEA reports on a quarterly basis total government spending, private consumption spending and private investment spending back to 1947.  The chart shows the quarterly percentage change in government expenditures and private consumption expenditures. A chart showing the same data, but taking 4 quarter moving averages before computing the quarterly percentage changes is identical. If I added in private investment to the consumption data, the pictures would be indistinguishable as well. 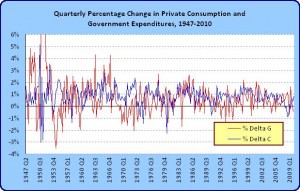 A careful look at the chart would tell you virtually nothing. Sometimes it appears that government spending and private consumption move in the same direction, sometimes in opposite directions. In fact, of the 252 quarters this chart covers, in 64.3% of the cases, government spending and private spending move in the same direction. If I add in private investment, the share actually rises. The correlation of these percentage changes is -0.12 – a very small slightly negative correlation. In an ideal Keynesian world, while the correlations would not be -1, they should certainly be much closer to one than zero.

Now, you cannot argue that these changes are reflecting successful government policy because I am looking at whether or not the government itself responded to the observed private data in a way consistent with Keynesian policy. This is an extremely primitive “analysis” so don’t take it at much more than reflecting the simple idea that it is not likely that governments respond in the way they think they can and that if there is truth to what I depicted then what appears to be going on is that government spending seems to ramp up during economic good times and ramp down during bad times – precisely the opposite of Keynesian proscriptions, and certainly destabilizing if you take that theory seriously.

My view is that if in fact this data is correct, then the government is doing exactly the correct thing if it hopes to alter business cycles. Government spending extracts resources from the private sector, making us poorer. So we should “want” more of that during expansions. Similarly, we should want less of this wasteful activity during recessions.

There’s lots more to say – I hope this inspires a student to dig deeper into what is really going on.

Here is Robert Heilbroner on Keynes:

Keynes himself in a letter to the New York Times in 1934 wrote, ” I see the problem of recovery in the following light: How soon will normal business enterprise come to the rescue? On what scale, by which expedients, and for how long is abnormal government expenditure advisable in the meantime?

Note “abnormal.” Keynes did not see the government program as a permanent interference with the course of business (wintercow emphasis). He saw it as lending a helping hand to a system that had slipped and was struggling to regain its balance.