I am a huge fan of the series Friday Night Lights. We just finished watching the past season and an interesting storyline emerged in the final weeks of the season. The quick story is that Tami Taylor, the principal of the local public high school (West Dillon) was put on administrative leave (effectively fired) because of outside pressure from parents and the locals. Why? Well, she provided advice to a young girl (not even in her school district, and the girl solicited her, but that is beside the point) that ran counter to the emotions and beliefs of many in this West Texas town. 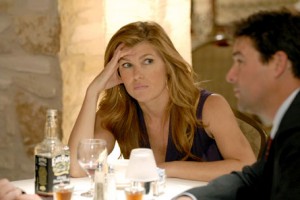 Whether Tami was right or wrong is immaterial. The point is, as principal of the public school, the only recourse parents opposed to her decision and character had was to petition the school board to have her fired. And barring the school board supporting this petition (which initially it did not) all disgruntled citizens really could do is place harassing phone calls to Tami, write outraged OpEds and stage rallies.

What do you notice is not on their list of options? Two things of course. First is that if they are parents, they have no choice whatever about who the principal of their children would be. If they live in West Dillon, their kids must attend West Dillon. And this is a poor town – no private schools to seriously choose from either. The second thing, true whether they are parents or not, is that their tax dollars must be used to support this principal they despise. They get no refund, no better service … nothing. They just put up with it.

Not much deep insight here, but seriously compare that to the world of market competition, a world where people paid to send their children to the school of their choice. Rather than parents resorting to protesting, rioting, crank calling, and calling for the head of someone that they happen to disagree with, they simple exercise their free will and withdraw their support from such a school and principal. We know how absurd the current system is – it wastes money, it is the playground of the teachers’ unions, it is the keystone to political demagoguery of all kinds, and in many places is very ineffective at educating children. That all aside, the education system as we have come to know it breeds contempt, mistrust, apathy, anger, resentment and intolerance. My family is fortunate enough to have a fairly affordable Catholic school nearby, and this is where we choose to send our children. That still costs a lot. For PreK we are spending over $3,000 per year, and that is for a total of 12 or so class hours per week. In a year or two that will run up to over $8,000 and by high school it will run us over $16,000 (we have two kids at this point). Further, we have an income (while certainly comfortable for us) that is below the median in our school district. We pay for the children of the richer families to go to school for “free” which is especially aggravating as their families take their vacations in the Caribbean, have second homes, have big boats and fancy houses. We could have some of that too if we just leeched off of the other taxpayers. You might call us irrational – after all, we did pay lots of money in taxes, you might argue that it would only be right to get our share back. But that is not right in our mind – and we will explain why shortly.

The point is, I resent my neighbors, I resent the things that are being taught in the public schools, I resent the hefty benefit packages of the teachers unions, I resent to spectacular facilities provided to the government school kids … and I still have to pay for it. Don’t like it? Move. Well, that’s not really an option is it. Not only would that require me severing every connection from civil society that I cherish, that would not protect me from paying taxes somewhere else. So at best we can have our income stolen from us, while we pay extra for a lower quality catholic school experience. At least I don’t have to regularly call for the head of the school principals who preside over an indoctrination of students that I cannot stomach. At least I can prevent our children from growing up as members of the state congregation. Just think of how different things would be if schooling were treated like, say, food?