Kudos to today’s Wall Street Journal to allow AFL-CIO leader Richard Trumka to make his case for public sector unions. His piece was unsurprising, but I chuckled at the imagery here:

It wasn’t teachers or firefighters or nurses who crashed the stock market and caused the recession that led to millions of layoffs and foreclosures. It was the so-called engine of our economy—Wall Street—which has suffered no consequence after nearly destroying the global financial system in 2008. Wall Street bonuses averaged over $128,000 per person in 2010, more than six times the average pension for a retired public-service worker in Wisconsin.

So here’s working America’s message to governors like Scott Walker and New Jersey’s Chris Christie: We believe in shared sacrifice. But we don’t believe in your version of shared sacrifice, where the wealthy and Wall Street reap all the benefits of economic growth, and working people do all the sacrificing.

So let me get this right, Governor Walker’s “crusade” against public sector unions bankrupting and holding hostage the taxpayers of Wisconsin is akin to enriching the pseudo-capitalists on Wall Street? I thought the problem was that “middle America” was increasingly alienated from Wall Street? 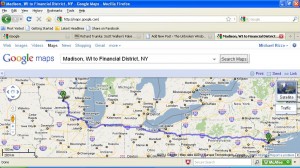 Can I get some directions please?