Search
Menu
Categories
‹ prev next ›
1
If People Grew Like Economies Have Over Time
March 17, 2011 wintercow20 Standards of Living

I am always on the lookout for creative ways to demonstrate to my students just how remarkable the recent record of global economic growth has been, with the attendant improvement in per capita living standards. If you normalize per capita income in pre-biblical times to take a value of 1 (say, in 5000 B.C.) here is what the world history of economic growth has looked like: 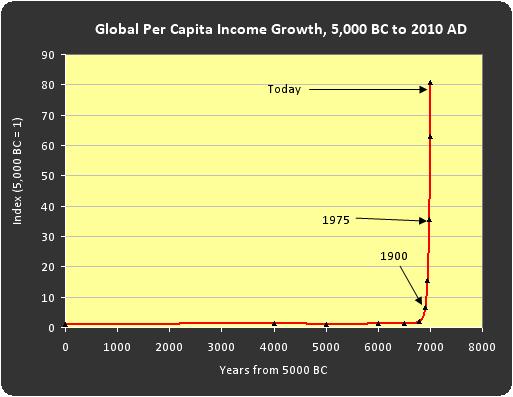 Imagine that the human body grew the way that our global economy has grown. An embryo at 9 weeks old is about 1/81 the size of a fully grown adult male. What would males look like if they had a growth pattern like the economy?

Males reach mature height at roughly age 20 (give or take). For the first 71% of the time since 5,000 BC per capita living standards did not change. This would be analogous to boys about .86 inches in height from the time they are 9 week old embryos until their 14th birthday! Then it would take from our boy’s 14th birthday through his 17th birthday for him to vault over the 1-inch height plateau. He would be playing point guard on the varsity basketball team at an imposing 1.1 inches tall. Take that Spud Webb. You’d manage to get above 1.5 inches sometime around your 19th birthday. Once you turn 19 things start heating up for you, and your parents get very frustrated buying you new clothes every few hours. At 19 years 4 months you will have skyrocketed to 1.7 inches tall. A mere 4 months later you will have grown to 1 foot, 1 inch tall (still less than the size of a newborn baby). 2 months after this you would have grown to 31 inches, or about the size of a large 1-year old infant. Less than one month later your height would have reached four-and-a-half feet, still shorter than a typical 11 year old boy. At this point, you will have been 19 years, 11 months and 19 days old. In the next 12 days, you will finally shoot up and reach mature adult height, growing an incredible 15 and a half inches, or more than an inch per day, before hitting the age of 20.

The analogy ends there of course. Boys stop growing. Old men even shrink a little. And while there is much talk about Western living standards stagnating, we are talking about them growing between 1% and 2% per year (and calling this a travesty) the rest of the globe is happily playing catchup — which should make the basketball games of the future far more enjoyable to watch.