Search
Menu
Categories
‹ prev next ›
3
State Spending, What is it Good For?
June 2, 2011 wintercow20 Fun Facts

The National Association of State Budget Officers is a great repository of data on state revenues and expenditures. I think looking at state spending and state tax burdens is a nice way to contrast what happens in government as compared to the private sector. Many people (rightly) are bummed out that private sector wages have been flat for a decade. If this is the case, then you might reasonably expect that spending in the government sector would be flat, or at least adjusted so that they grow no faster than inflation and population. Here is the data, summarized for you: 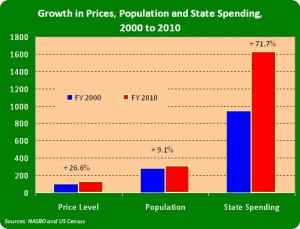 So, state spending increased by 72% over the last decade while prices increased by 26.6% and the US population increased by 9.1%. In other words, state spending increased over twice as fast as it would have had to in order to deliver the same real quantity and quality of public goods to its citizens today as compared to in 2000. Let me ask a question just like the pols like to ask about the world we live in: is the quality and quantity of public goods you are receiving today from your state better than, the same, or worse than, you were getting 10 years ago? And what does your answer tell you about what the states have been spending their money on? And what does your answer tell you about the productivity and efficiency of the states?

Oh, and during this time period, the “average” person’s state tax burden has increased by over 40%. And that’s before we are going to have to deal with the coming public employee pension and health benefit tsunami. In case you were wondering, the states with their public employee retirement SH&T together are Idaho (with no unfunded liabilities) and the Carolinas, each with less than $500 per taxpayer in unfunded liabilities.