Poor families (bottom 20% of household income) spend well over 10% of their annual budgets on energy and related items. And as the figure below indicates (from the Center for Budget and Policy Priorities) the impact of higher fuel costs on the poor goes well beyond the direct increases in electricity and gasoline charges. 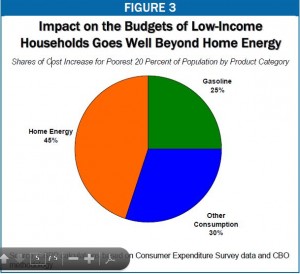 The research (and meta-research) of James Hamilton has also demonstrated that oil price shocks can have a significant (and large) negative impact on domestic growth prospects. And we know that wholly aside from the direct impact of higher energy costs on the well-being of the poor, it tends to be the least economically advantaged that are most hurt by downturns in economic activity. Just look at the unemployment rates by education-level during this recession for a glimpse of what I mean.

Let’s keep this short then. Energy price shocks disproportionately hurt the poor in two ways: directly through their pocketbooks and indirectly through the suppression of economic growth. It would seem to me then that as a matter of social justice we would be feverishly pursuing any and all energy policies that would prevent these trends from happening, and this includes accounting for whatever adverse environmental impacts might occur from this pursuit (I suppose this observation depends on exactly who the object of social justice might be). This observation is of course wholly divorced from the possibility that development of fracking and related industries is likely to provide employment for hundreds of thousands of people, many of whom you would think would be the target of “social justice policy” in the first place. But these jobs are costs not benefits. We should want to burn cheap energy and not have to work to do it. Irrespective of what one’s views are on the validity of “social justice” as a doctrine for guiding us in our political affairs, it should at least be in the realm of decent matters to require a consistent approach to the doctrine if it is going to be invoked.