This pretty cool map has been making the rounds on the world-wide-interweb: 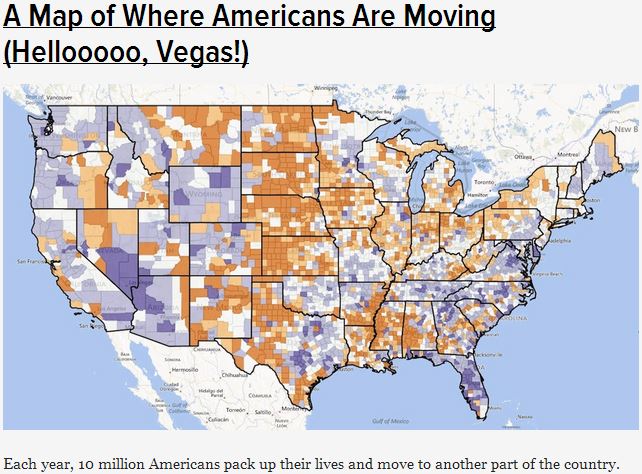 The purplish areas are places where there has been net in-migration while the places in orange are those experiencing the most out-migration. Check out where I live by the way (the only purple area seems to be be the DPRI and the capital, Albany – great). But if I were someone encamped in the “Occupy Everything” movement and worried that global warming is going to end the world and that we cannot deal with it, I’d try to have the folks running the ObamaCare websites take over the internet life of this image and make it disappear. It happens to be a seriously inconvenient picture for people.

Look at where internal migration patterns are going. They are going to the coasts in a serious way. Remember one of the greatest fears of the warmists is that sea levels are “definitely” going to rise by not just inches per decade like they have been for 250 years, but by feet per decade or even faster. And we are told that unconscionable damage will happen as a result (e.g. Superstorm Sandy day after day after day). Seems odd to me that we are fleeing FROM the dry and inland places to the wet coastal places despite this. Maybe people haven’t gotten the memo? Or maybe they are going there despite the fact that insurance premiums in these flood zones are skyrocketing (that’s an empirical snarky comment by the way, I don’t know what’s going on there, but surely it would be useful to look)?

Look deeper at the internal migration patterns. Even as the “flood prone” and tornado-prone Midwest seems to be depopulating, there are areas of deep purple in those very same regions. Look at the greater Denver areas, or the parts of Oklahoma and Arkansas and Missouri that are purple. These are the very same places where the worst floods and tornadoes of the last decade have hit – the very same places that have raised the irascible ire of the warmistas.

Look even deeper at the internal migration patterns. In addition to folks moving to coasts, and in and around tornado and flood prone areas, they are moving South and they are moving West. And they are moving to places like Austen and Las Vegas that basically have no water, no resources and are MUCH hotter on average than the places people are leaving. For example, the annual average temperature in Rochester is 47.6 degrees and it has 34 inches of precipitation on average (I would have bet more). In Austen, TX the annual average temperature is 68.6 and annual precipitation is 31.9 inches. In other words, annual average temperatures in Austen are over TWENTY degrees hotter than in Rochester. And Austen is not only considerably drier in terms of how much rainfall and snowfall it gets, there are far fewer water resources around as compared to the Great Lakes and Appalachian watershed. The worst case (i.e. supremely unlikely) global warming that is supposed to happen over the next 100 years is 9 degrees Celsius, which is 16 degrees F. The point here is that people are moving rapidly and consciously to places that are MUCH hotter and MUCH drier than where they are coming from. The hotness and dryness is far more severe than the worst global warming models predict, and people are moving there in the time frame of weeks and months, not years and decades.

Look even deeper at the internal migration patterns. People are moving TO the places where natural disasters are most likely – especially the hurricane battered East and Gulf coasts and the earthquake zones in the West. And like above, not only are they not fleeing these areas, and not fleeing them over a 100 year period, they are fleeing TO those areas in a matter of weeks and months.

Indeed, we can dig even deeper into the climate patterns in the receiving versus sending locations, but even the cursory review above should make it pretty clear that the worst case climate scenarios conjured up by the warming crowd seem to be posing no particular threat to people already. They are rapidly moving INTO the places that look most like the future wretched planet we are supposed to inhabit. And they are doing so freely. Furthermore, these migration patterns also ignore the fact that when (if?) we wreck and warm the planet and melt all the ice, that massive areas heretofore uninhabitable will become pleasant places to live. Indeed, if we melted the entire Antarctic ice sheet, sea levels would presumably rise by a lot, and fancy doomy maps are making the rounds about what the world would look like with the new smaller land masses on each continent. However, Antarctica is bigger than Europe. And I’ve yet to see a map suggesting that adding a full continent to the Earth is perhaps a little bit of a side benefit to offset some of that “cost” of higher seas. And certainly those maps say nothing at all about how awful it would be to adapt to such things. The map above gives us a really solid look at how “awful” it would be to adjust to even the WORST case climate scenarios people are painting for us. Couple that map with the completely corrupt and inept political process (even the great commander in Speech recently gave an interview confirming that government is f-ed up, he admits that government doesn’t work, and he is the government equivalent of Billy Graham), with humans general ability to solve problems, and I think that a pretty inconvenient truth is staring people right in the face. Sadly, no one will recognize it. And even more sad, among those that do, rather than see the map above as a reason to celebrate, which it surely is, folks will use it to cast more vitriol at “denialists” like me.

One final observation. Life expectancy today in the rich nations is almost 80 years long. In 1800, at the dawn of the Commercial Revolution, the global average life expectancy was closer to 30 years old. We have pro-football (until that’s banned), we have laptop computers, we have airline travel, vaccines, clean water, national parks, hiking gear, fast cars, great movies, and so on. Do you think people would have made the tradeoff 200 years ago: a warmer and more chaotic environment (presuming it’s a problem) in exchange for those things? Would they be permitted to? And would not today’s generation want to ask themselves the same questions? Is the “tragedy” of people migrating to avoid global warming not worth the benefits of raising billions of human beings from misery and desperate poverty? Is there even a tradeoff? Look at the map again.

So, who are the deniers?