In my Living Bird magazine this month comes a feature article on the predicament the Greater Sage Grouse finds itself in. These birds are quite spectacular in particular for the dance that the males put on come mating season. It’s not just that male sage grouses strut their stuff, but that the typical “winning” male will end up enduring something close to a full evening of dancing their heads off to demonstrate their fitness for reproduction, and the site is as beautiful as it is rather bizarre. 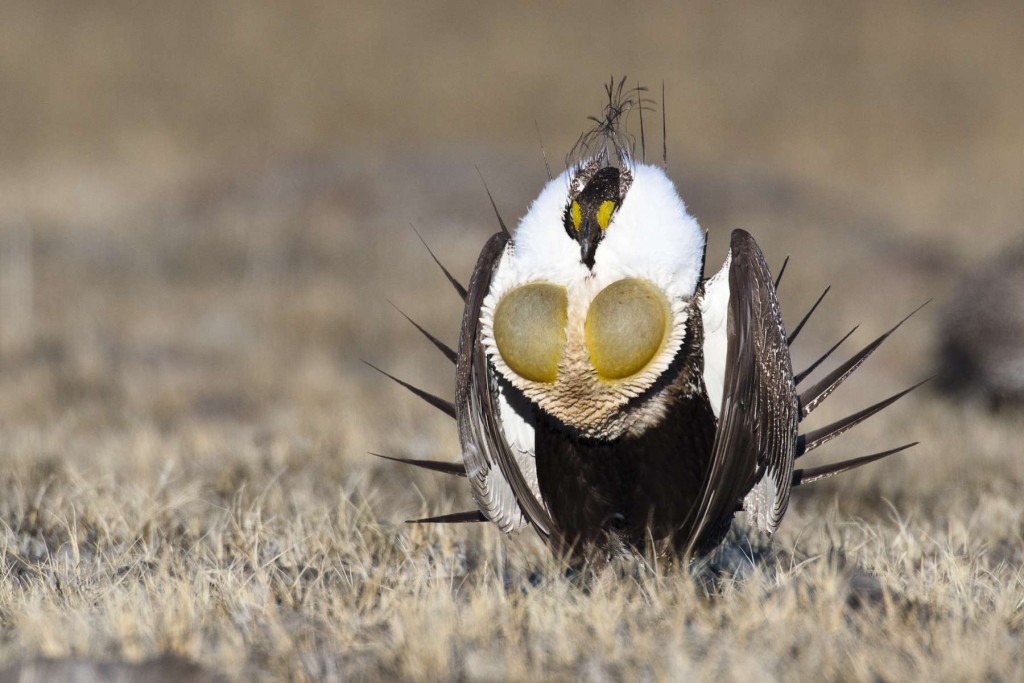 The sage grouse range used to extend from southern Canada to as far south as southern Utah, and from the Black Hills to the East to as far west as eastern California and central Oregon. Their range is much more limited today, not in terms of span, as it is still found in most of those places, but in terms of their densities. Like many other bird species, their current populations are but a fraction of their thought to exist historical maximum.

A few things of note about this bird and the question of optimal populations in general. First, just because the bird population is only 2.5% of its former peak, it does not follow that the bird is threatened or endangered. Similarly, just because a population may be near peak, it does not follow that the population is not threatened. You need a bit more science and context for that, and I encourage you to pick up a reasonable ecology book for an explanation. Second, there are often large cyclical swings in animal populations that have nothing or little to do with human influences. It may not be the case that 96% population declines are part of natural variation, but it is not uncommon to see major swings over the course of a few decades.

The reason for the post however is that the article, perhaps not surprisingly, uses the context of the emerging energy development that is happening in western Wyoming and some of the neighboring states (e,g, North Dakota is home to a huge energy boom, but of course very little of the grouse’s range historically extended into that state) as a prime reason why the grouse is threatened today. This is both frustrating and misleading. The frustrating part is that I can no longer find a conservation organization that isn’t using scare tactics regarding human population and development to explain almost anything that happens in the world. On one level this makes sense as humans indirectly do influence the planet in many ways, but on a more realistic level it is entirely misleading – painting industrial capitalism at the focal point of destruction and not some other human centered institution. The misleading part is that energy development, particularly with the emergence of horizontal drilling, is that even “intensive” ystem energy development takes up a negligable amount of land area, especially as compared to things like wind and biomass production (the article does throw a token nod toward wind). Further, when folks read that “Fossil fuel energy development threatens the sage grouse” what images do you think come to mind? Do you think the first thought of folks is simply the amount of land required to do the drilling? Or do you think that images of spilled fuel, polluted water sources, fouled air, etc. come to mind?

The truth of the matter is that to the extend that modern energy development threatens the sage grouse, it is because of the use of land surface area that is also the area where the grouse breed and feed, particularly in the winter months when food is hard to come by. The article in question above only indirectly makes that clear. But let’s ask, what is the real reason why grouse populations are far lower today than say 150 years ago? Is it oil and gas drilling? Nope — nd this is not surprising, it is a story shared by many species out west. The reason for the decline is massive alterations in the habitat of the grouse, in particular the decline of the sagebrush steppe ecosystem that is so important for this bird and others. A similar history exists on the Kaibab plateau and the deer populations, and even in Yellowstone. What is common about the real problem of habitat segmentation and destruction? Well, it certainly isn’t energy development that is responsible and in almost every case the habitat we are talking about is on land that is owned, managed and stewarded by the federal government. In Wyoming, most of the land in question appears to be scrubby wasteland, and hence was not homesteaded and reverted to BLM ownership. And on these lands and others like it, over a century of overgrazing and poor management of the land is largely responsible for the reduction in ranges and health of the grouse and other high desert species. The article in Living Bird takes SEVEN pages before it mentions this, and it is of course THE prime threat to the sage grouse. And while tinkering around the edges of energy development may help (e.g. ensuring that well pads or not sited near breeding grounds, or that well pads are not overly concentrated in winter feeding areas), the ultimate “solution” to the problem of the sage grouse lies in restoring the sage steppe to something resembling what it looked like before the west was settled.

It’s understandable why the energy industry takes center stage in the article and others like it, and not the difficult problem of restoring habitat and managing grazing and leases better, it’s because the former appears to be simple, with just “better and stronger regulation” as the easy solution, paired up against a greedy and exploitive non-steward of the land. But as usual, the real story on the ground is far more complicated and far harder to solve. There are not clear villains and there are not easy slogans to chant. Over a century and a half of awful range management, on land owned by “us” has led to the problem we have today. And we have hundreds of built in interests that are going to be resistant to changes – from the ranchers that currently receive highly subsidized access to grazing rights to the members of the federal land agencies who could not imagine having their tasks devolved to the state level or even to consortia of private individuals or conservation groups. So, we fiddle around with that what we can see and stir up emotional support for. And should the grouse ever go extinct, we end up with a simple story of evil triumphing over good, which sets the stage for the next debate about industrial capitalism and human development,

Finally, the article points out that there has already been something like $400 million spent by federal and state agencies to protect the grouse (I don’t have a time frame). The article even suggests that more is coming when they say that it will take a “football stadium sized investment” to make progress. How do the folks pontificating about Baltimore feel about this? Also, how can episodes like this, and the fact that $100s of millions of dollars have obviously been spent in Baltimore to improve the conditions of that city, but to little avail, impact the way people think about government policy and how easy it is for policy to change outcomes? I’d suggest again that we need to be humble, and that it may not perhaps have anything to do with the dollars “we” invest. Surely a rethinking of the way we respect private property rights and the evolution of institutions is in order. If hundreds of millions of dollars can’t protect a bird out in the middle of nowhere, one should not be surprised that hundreds of millions, or even billions of dollars may not be able to “solve” our shared problems.