Why We Can’t Have Nice Things: Public Services Edition. This is from the New York Times, and note that this says nothing about the pensions here, which taxpayers will surely be paying for a second time when it is discovered that they are underfunded:

An examination by The New York Times reveals in stark terms how the needs of the aging, overburdened system have grown while city and state politicians have consistently steered money away from addressing them.

Century-old tunnels and track routes are crumbling, but The Times found that the Metropolitan Transportation Authority’s budget for subway maintenance has barely changed, when adjusted for inflation, from what it was 25 years ago.

Signal problems and car equipment failures occur twice as frequently as a decade ago, but hundreds of mechanic positions have been cut because there is not enough money to pay them — even though the average total compensation for subway managers has grown to nearly $300,000 a year.

Subway workers now make an average of $170,000 annually in salary, overtime and benefits, according to a Times analysis of data compiled by the federal Department of Transportation. That is far more than in any other American transit system; the average in cities like Boston, Chicago, Los Angeles and Washington is about $100,000 in total compensation annually.

The pay for managers is even more extraordinary. The nearly 2,500 people who work in New York subway administration make, on average, $280,000 in salary, overtime and benefits. The average elsewhere is $115,000….

Union rules also drive up costs, including by requiring two M.T.A. employees on every train — one to drive, and one to oversee boarding. Virtually every other subway in the world staffs trains with only one worker; if New York did that, it would save nearly $200 million a year, according to an internal M.T.A. analysis obtained by The Times.

Several M.T.A. officials involved in negotiating recent contracts said that there was one reason they accepted the union’s terms: Mr. Cuomo.

The governor, who is closely aligned with the union and has received $165,000 in campaign contributions from the labor group, once dispatched a top aide to deliver a message, they said.

Pay the union and worry about finding the money later, the aide said, according to two former M.T.A. officials who were in the room.

My friend runs a parks management company, and he says the same thing is happening in the park system:

And then of course, I forgot to add to our list of possible topics, the idea of “Net Neutrality” … I am not learning much from my Facebook feeds on that one. We may be within my time window when it is too soon to talk about it, we’ll see how it goes.

My question to the group would be, “how did you form an opinion about it?” Did we look at the literature on spectrum allocation? Have we examined the political economy of why the Big media companies like Google are in FAVOR of it? After all, most people are terrified of what google is/may do to us in future, and now they are all siding WITH the behemoth on this one? Have folks asked, “if net neutrality is bad/good/does what they say, then we should see …?” And so on.
Here is what my Facebook feeds look like, and these are from influential people who graduated from an elite Liberal Arts college – I get better commentary from my 11 year old hockey players. 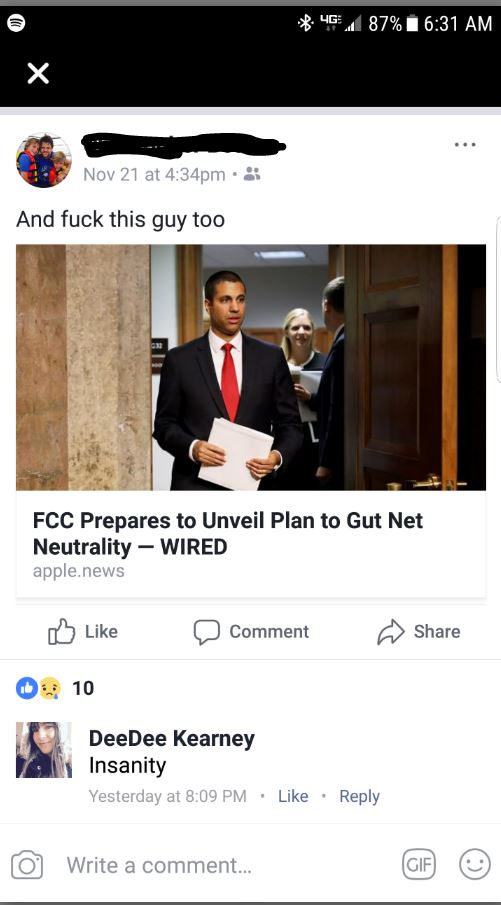