Search
Menu
Categories
‹ prev next ›
9
In Which One Day I’ll Be Shot or Arrested Too
June 22, 2011 wintercow20 Flotsam and Jetsam

When I am in my car, especially if I plan to be in it for a while, I carry a Flip video camera with me. I usually carry it so that I can film something cool that I drive past — such as a field of sunflowers, a cool looking barn, etc. But I also have it so that I can record any interaction I have with government officials should I have the unfortunate pleasure of interacting with them. I am sure that on a traffic stop one day if I reach for it a cop may feel threatened and taser me or worse. Or perhaps they’ll simply arrest me for surveilling them.

In any case, a woman in our very own Rochester was arrested for videotaping them cuffing someone else and she did the taping from her front yard. The citizen’s name was Emily Good. The cop’s name was Mario Masic. 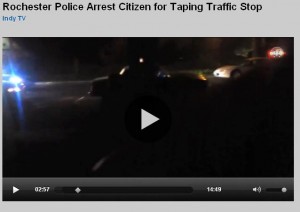