This is the response from one of the students I know. Of course, none of my questions are answered and I will give you $100 if you can guess how quickly the SEIU guys took to get back to me about this. OK, that is a bad bet on my part. They of course have still not responded to me. 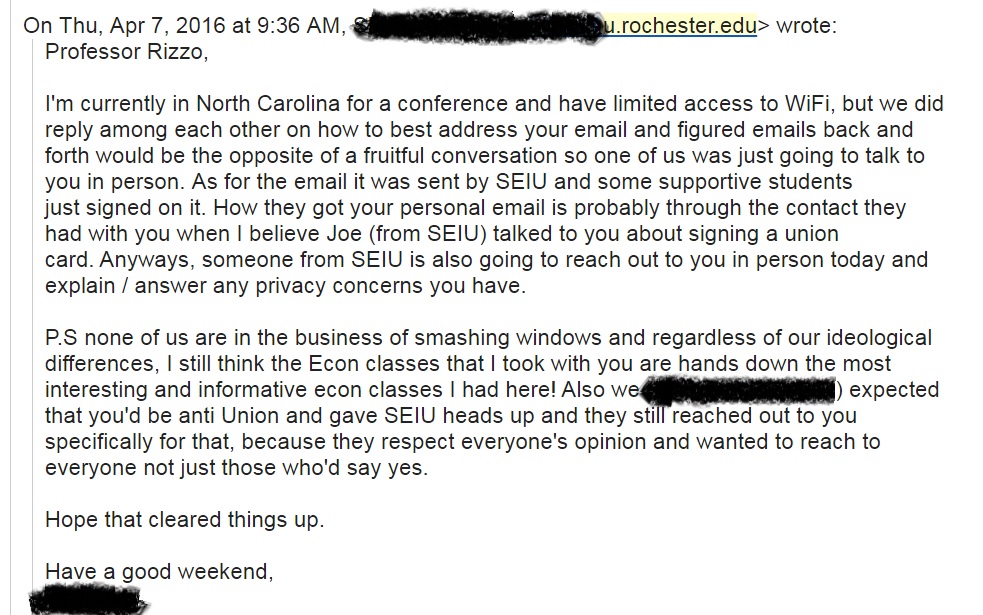 Of interest here is:

(1) Why the heck is the SEIU involving students in this, especially when students are particularly ill-equipped to understand the labor market conditions that they are advocating for?

(2) I probably would have let this entire thing just die in the vine if it were not for the “PS” part of the note. My inclusion of the smashing windows comment in my initial e-mail was a thinly veiled message that they should study more about labor history and what unions actually do than it was an actual concern of mine that my windows would be smashed. That this was taken literally is disappointing. But more important, what is particularly galling is what is illustrative of everything that is wrong with universities today. Now, though I know these three students, they know nothing about how I feel about unions, they know nothing about my ideology, nada. I do not share that information with people. I am an equal opportunity critic in class, having fun times with Bernie and Bush and everyone in between. So of course, our students just KNOW what I think about unions, and not only that, they are happy to share that information with others. And of course, not only are they just expressing that as their opinion, they are inserting that opinion into a matter that isn’t just ideological, but which seriously impacts my employment situation. Consider a similar situation. I suspect that Student X is going to be anti-math. And so I reach out to the Math department to give them a heads-up about that.

Let me ask, is this acceptable in any way? How would a student who knows little to nothing about me just assume how I feel? If they actually understood anything about my political philosophy they’d know that (1) I don’t adhere to one, and to the extent that I do it makes me really uncomfortable and (2) to the extent that I do adhere to one, it would suggest that I am strongly in favor of the right of workers to form a voluntary association to negotiate for better working conditions. What does this tell you about the thinking here? And what purpose would there be in sharing this information with SEIU? Again, go back to Joe Holt’s comments to me. The reason a student would tell the SEIU that I am anti-union would be either to prevent me from learning more about the organizing effort, or to intentionally exclude me from the organizing effort. In either case, that seems to make it more likely that Joe was clearly lying to me earlier and again not only does this seem to get really close to running afoul of labor law (again, imagine if I made it hard for someone to vote in a real election) but were it not for the fact that these are posited as “opinions” these comments to SEIU by the students would appear to be pretty close to libeling me. They are spreading false information (in fact, I am PRO-union, just not in the way that these kids understand) AND they are spreading information that causes direct harm to me. Doesn’t that fall under the definition of libel?

So, I’ll just put up one more post on this for now. I decided to craft a strongly worded note in response to this, to remind students that their actions are not costless and in fact that it is a very presumptuous student who believes they know what is best for me. I am not trying to engage them in more discussion, but rather to tell them that what they are doing is both wrongheaded and not appreciated. These students have spread false information about me, have used “rumors about my beliefs” as the basis for spreading false information about me, and have taken actions that are going to harm me. My intention in responding to them is to remind them of this, and to use it as a chance to remind them just exactly what it is they seem to be supporting should they happen to want to think about it any more than just holding up a fist and saying, “rock on contingent faculty!”