Oh, you thought it was the Trumpian loonies? Think again. The same “democratizers” that came to U of R last spring have descended on Harvard. Isn’t it totally fascinating how “professional” the union organizing apparatus is? Sounds pretty darn ironic for a group of people who are “against the man.”  In any case, one of my dear former students at U of R is now a graduate student doing research at the Dana Farber Cancer Institute, and they are trying to unionize graduate students across the campus at Harvard.

Here is the tone of what is going on to people who are not in support of the union effort: 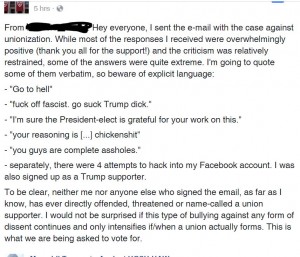 Here is how my science student went off about it on Facebook:

So lets get this straight about the union, correct me if I’m wrong.

– it is GSAS-wide, and a simple majority wins and the will of the union is imposed on everyone.

-Departments cannot opt out, no matter what, no matter their share of the benefits/contributions

-you can opt out of joining the union, but you cannot opt out of paying, no matter if you voted no or did not vote, and it is deducted automatically which is downright subversive.

-only 40% of dues paid stays local. 60% goes UAW wide, including paying union fat-cat salaries (some make over 1*10^5 in salary alone), national political activism that many of us wouldn’t ask or allow to be funded. (Edited here to include the fact that the people so “enthusiastically” supporting these measures are compensated well for their time and effort, and part of your dues will go towards their efforts elsewhere to do this exact thing – why do you think G5\6’s are behind this?)

-According to their own documents, students in the sciences will be disproportionately affected because once we become members, we do not switch out like non-stems that may rotate in and out (all the benefits, only some of the dues). So we will be subsidizing the rest of the school

-oh I almost forgot! All of the people who would be most impacted, us, the G1’s, CANNOT FUCKING VOTE. We can do some kind of protest vote but of course they will only count it under some certain convoluted circumstances. So not only are we forced by a simple majority of the entire school, we are disqualified from even participating but must accept the outcome!

-Average raises year over year have been around 2-3% Dms wide. Our salaries as science graduate students are some of the best in the nation. If you really expect to net anything more, or anything period from joining a union after paying 1.5-2.5% in dues, you need to wake up. The administration is already well attuned to our needs, serves us very well, and our relationship with them is already in great standing. (Edited – forget about it if you have a Fellowship – NIH, NSF, private foundation, doesn’t matter, if you make more and/or have different benefits, you pay more. How they exactly will deal with the situation of bargaining for individuals like me, who knows).

My blood is boiling from writing this. I encourage you to be as loud and cantankerous as you possibly can. This crotchety man will not be forced into this shitty situation. Do what you can in the run up to the “election” I will most likely have a melt-down in front of these assholes very soon. If this resonates with you, share the shit out of it. If it doesn’t, cool beans, get ready to live with the consequences of other people’s decisions over our own lives, finances, and relationship with Harvard, GSAS, DMS, and BBS and each other.

Not on my fucking watch.

Here is the original correspondence that alerted me to the events of the day at Harvard:

Hi Professor, I hope everything is going alright with the semester coming to a close! I can’t help but think of you when I think of university union elections!

While it appears that there is more opposition to the organizing efforts as i may have though in the medical school/Biomedical Science programs, I am all too sure unfortunately that the other disciplines will all but vote overwhelmingly yes. That means of course by fiat i am forced to be part of it against my Will.
The most distressing thing however, is that since i am on a 2-year fellowship, i am paid through a foundation and not by the medical school. That means that also technically i am not part of the bargaining “unit”. anecdotally however, i’ve heard that they will still deduct their tribute from my pay automatically, although again i am not under their contract and will not even see any benefits of it!
I’ve reached out to the school admins but have yet to have heard anything as this is not a problem for most. What if anything can I do? Sorry to burden you with my troubles but i couldn’t think of anyone else to vent to about it!
…
I think you are right! But the unionistas are getting paid and I’m wasting valuable time that could be spent on learning and doing research that is contrarily not compensated.

The great thing is that despite this whole mess the research community here is amazing and every day I’m learning! …

…
They are paying shills to go to peoples labs and advocate on and offline for the union
They have paid for adds on facebook targeted to many programs in the sciences here
They are phonebanking
They are distributing facebook, email, contact, work location information and coordinating responses and messages to people
They are holding meetings on campus
I even recieved a message from someone i knew from my work at Columbia asking to rethink my positions after voicing some opinions on faceook
I have spent the last two hours with some others and we have one measly facebook group opposing the unionization. I have written posts showing their illogical ideas and surreptitious and conniving tactics. In that time i already recieved the aforementioned message from someone i know
ON TOP OF THIS, FIRST YEAR AND SOME SECOND YEAR STUDENTS ARE NOT ALLOWED TO VOTE. I have photographic evidence of correspondence with them saying that we do not count as “researches” (sic) and our votes are contested and can be counted by them after the election. Do i trust them, after all this to do that? if they win, are they going to count hundreds of no votes?
Besides the fact that I am, right now, sitting here in my lab at Dana-Farber DOING RESEARCH.
This is the most pissed off I may have ever been in my entire life. I am as you know, a little gunshy about speaking out about these things. but i dont care. this ends today, and this will not be forced on me.

So, I don’t know what is going on at Harvard, but surely it is similar to the thuggery that the UAW practiced when I was a grad student at Cornell and similar to the “very thoughtful” work of the SEIU on my campus this past Spring. The basic idea of course is that some (unproductive) graduate students want to unionize. Fine for them. But of course, they are not allowing everyone to vote in it (democracy!) and even so, everyone is going to be forced into the union whether they wanted it or not. And not only is everyone forced into the union, everyone is forced to pay dues – even if these students do not want any part of it and even if these students see no benefit from the union. Of course, a large chunk of the dues end up in the hands of the “party” and of course end up being used for political purposes and lining the pockets of well-paid union professionals. Classy.

If I had time I’d write more.

Please explain to me how this is not totalitarian anti-democratic narcissism?