I was asked to contribute 100-150 words to a campus article on the proposed (i.e. forthcoming) water bottle ban at the U of R. I’d reprint my response but I am sure it would more than have me removed from polite company. If anyone thinks banning the bottle has much to do with the environment, I am Barack Obama.

By the way, I ran into this site when we took our family to the Museum of Natural History in NYC last month: 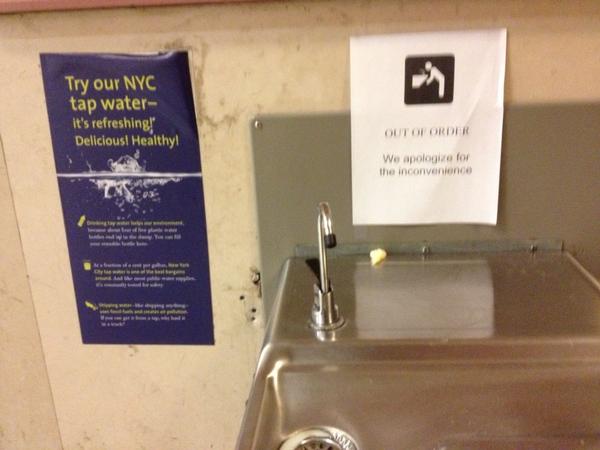 Did I mention that some survivors of Superstorm Sandy in NYC found their water unsafe to drink in the aftermath of the storm?

Strangely, I find this to be perfectly related to my views on modern “E”nvironmentalism. Here is Arnold Kling merely asking questions of the neo-Keynesians regarding their justifications for continued deficit spending:

The main argument against a balanced budget amendment is that it would tie the hands of Congress in dealing with economic downturns. Keynesian orthodoxy says that deficits are appropriate in a recession. The orthodox Keynesians are both loud and numerous within the economics profession. However, they may be wrong. Below is a list of reasons.

2. The macroeconometric models that are trotted out to support Keynesian policies are highly suspect. (See “The Soothsayers of Macroeconometrics.”)

3. The Keynesian rationale for deficits would imply that when the economy is not in recession, a balanced budget or surplus is in order. However, the United States has run deficits nearly every year since the Keynesian framework was adopted in the 1960s.

4. As is well known, the Congressional Budget Office projects increasing deficits starting in about 10 years, as the full force of Baby Boom retirements hits the budget. From there on, the CBO projects ever-widening deficits. Yet no Keynesian is coming forward to suggest that perpetual deficits are appropriate. We are not always going to be in a recession. Why is there no plan to balance the budget?

5. Technically, according to the National Bureau of Economic Research Business Cycle Dating Committee, the most recent recession ended in June 2009. In theory, the rationale for deficit spending ended on that date as well. Of course, economic conditions today are not very satisfactory. But if it is necessary to run deficits whenever conditions are “not very satisfactory,” when will we not run deficits?

In short, giving governments the discretion to run deficits does not work out well. In theory, government is supposed to fight recessions with deficits, which should then be replaced during normal times by balanced budgets and surpluses. In practice, deficits do not necessarily have the expansionary effects predicted, nor does deficit reduction necessarily exhibit contractionary effects.

All of the major countries that have used the Keynesian rationale to justify deficit spending are now on unsustainable fiscal paths.Moreover, in practice, deficit spending tends to become permanent, not temporary…

Do read the whole thing.