No, it’s not because of this (in case you don’t want to sort through it, we’re #7).Why was it dreadful? Because like most other colleges, all it really does is pay lip service to the idea that students will develop critical thinking skills. Amherst still tells its customers that this is what it does. Here is an excerpt from its first-year seminar descriptions:

Though the subject matter of the courses varies, each seminar constitutes an inquiry-based introduction to critical thinking and active learning at the college level

If by critical thinking they mean, “to be critical of markets, capitalism and commercial society” well then they are accurate. But if by critical thinking they mean something like engaging students in a serious process of inquiry, building upon both theoretical and natural law foundations, then the place failed me. Maybe I was just a lazy student who did not take the right classes and who did not work hard. Or maybe I was too busy boozin’ it up with the football team to know what was really going on when I was there. You can certainly believe that. So why am I irked today? Well, it is because I just decided to reopen the Public Economics textbook I used as a student in 1994 (or 1995). Let me lay a little groundwork here.

The topic of Public Economics spends a good amount of time developing the economic theory of public goods and discusses the options “society” has for seeing to it that “optimal” amounts of these goods get produced. Now, canonical theory suggests that goods that are both nonrival in consumption (e.g. when  I look at a sunset it does not prevent you from enjoying the same amount and quality of sunset as I do) and nonexcludable (e.g. providers find it difficult to prevent nonpayers from enjoying it, such as when you get to enjoy my stunningly good looks when you walk past me at a ballgame) would tend to get underprovided if left alone to market forces.

Now, that does make for nice textbook theory, but it turns out that the case for market imperfections in the production of public goods is at best vastly overstated, or at worst, near utter bunk. Of course, it took me 16 years to even learn that some people had spent entire careers and won Nobel Prizes (see here and here and here for three important contributors) discussing how realistic and serious these problems were, and how realistic it was to expect government fixes to public goods problems to even get it right themselves or that it was entirely possible for private actors to overcome many of the things which plagued the provision of public goods on their own (see here for an extensive overview of the latter). In future posts, I will outline each and every one of the arguments one at a time, but for now, let’s just accept that the canonical theory is at best limited and not accepted by most serious economists as the end of the story).

So, you’d think that taking a course in Public Economics at the best college in America you would at least be exposed to the possibility that the canonical theory was a bit quaint or simple or something to that effect. You would be wrong. Here is the book we used: 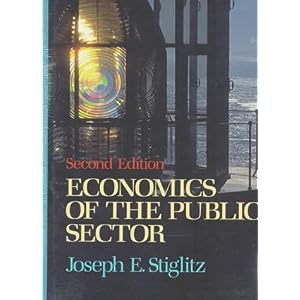 Note that Joe Stiglitz was a superstar student at Amherst before me. He has won a Nobel Prize. And he is certainly a cherished icon of the progressive left. But does that mean he should totally blow it in a textbook? Think of this – you have one chance to make the most powerful impression about the topic you are writing about by placing an iconic image on the cover which is meant to illustrate a major problem, and the best you can do is pick an image that has been totally and utterly destroyed by the economics profession as a good example of the “public goods” problem? To fast forward about lighthouses – the classic argument is that “governments need to provide them” (or some variant of that) because lighthouses send out information (light) to people that is both nonrival and nonexcludable. When my boat sees the light, it does not diminish the light for the next guy. And using old technologies, it was hard to imagine how you could prevent free-riding. Of course, it has been shown that private solutions to the “lighthouse problem” were extremely common – in fact most lighthouses between 1500 and 1800 turned out to be successfully privately provided. We’ll tell you why in a future post. But not only that, modern technology has solved the lighthouse problem obviating any need (if there ever was one) for a government role.

Surely Mr. Stiglitz was aware of this when he wrote the book. And he still puts the image on the cover. And he does not dedicate a single word to this historical occurrence or even the mere possibility (after all, we are theorizing, so shouldn’t we completely theorize?) anywhere in the 650+ pages of the text? There IS a chapter on public choice, but it is merely talking about the technical difficulty of aggregating preferences and touches a little bit on interest group politics. It says nothing generally about regulatory capture, bootleggers and baptists nor does it explain the work of giants in the field of regulation and public choice like Stigler (he gets a footnote on page 6), Olson (only gets a citation for his work on health care, and this in an appendix only) or Buchanan (he actually gives Buchanan a slap with a cite on his chapter on tax reform by calling the idea that political actors also face economic incentives, “pessimistic and cynical.”

Most egregious for a book on public economics is that the Coase Theorem gets a dismissive two paragraphs in the Chapter on externalities. In fact, most introductory econ textbooks and intermediate micro books dedicate several pages and dozens of practice problems to the revolutionary work of Coase – which is far more authoritative than even Coase himself probably thought of it at the time. So, we get two paragraphs on what turns out to be a fundamental theory in explaining why externalities exist and how we can mitigate them, of which canonical solutions are merely a special case of this general theory. And then we get 18 pages following that discussing the failure of private solutions to public goods problems (with not one single citation or example) and then pages upon pages of discussion of “public remedies to externalities” again without a single example.  He does however rescue himself a bit by spending two pages at the end of the chapter discussing the role transactions costs play and the role of the possibility of political capture (even with one example). But in none of the discussion of the public remedies are we presented with any examples of failure (outside of the Clean Air Act implied in my prior sentence). So we never get to learn of how awesome government production of public goods led to this or this or this or myriad other examples.

Maybe I am being too critical. But I distinctly remembering my take-away from that class as being, “we need the awesome and benevolent powers of government to solve these problems. I know markets usually work well, but “boy do they suck sometimes”!” That thinking stayed with me right through my own doctoral dissertation, a near paean to the glory of public involvement in higher education (that’s an exaggeration, but I don’t see the work that I did as worth the paper it was printed on) and was not challenged until I got into teaching – whereupon I took it upon myself to read original source materials and as voraciously as I could, and discovered that I was missing something very important from my education. Maybe you can say, “ahaaa! That curiosity was the reason you dropped $100k at Amherst,” but I think my mom and dad would tell you I was plenty curious throughout my life. The curiosity that Amherst encouraged, perhaps well enough, was for me to sample lots of interesting and different classes that I might not otherwise have taken had I been exposed to the more classical education I now wished I would have had. But I think that is malarkey. A good classical education would have done for me what I tried to do for myself – sample the best of Philosophy, History, Science, Religion, Literature, Art, Classics, etc. that all serious thinkers that preceded me would have had access to and understood well, but that now I tried to figure out on my own, and in a most uncritical way.

I wished I could get my money back. Talk about the problem with “experience goods!”