April 24th  is the day that Armenians use to commemorate a despicable and horrific genocide that was perpetrated on their people by the Turks. I couldn’t wait a month to commemorate it.  More on the sick particulars of that below. But I wanted to bring this remembrance up and coin a new fallacy that I suggest we ought to uncover more forcefully. I call this the Hades Fallacy and it has an analogy known popularly as the Nirvana Fallacy.

The Nirvana Fallacy is what interventionists in economies typically commit when they invoke some “market failure” argument as a reason for government intervention (and this assumes the indictment is correct in the first place, which is not obviously true). We can write down competitive market models where equilibrium outcomes do not maximize “social welfare” because of one of these failures, and then we can simply argue with the wave of a wand that a particular government tax, subsidy, mandate, regulation or other intervention can actually get us to an “optimum.” Let’s keep values and process out of this too, and focus only on outcomes. The Fallacy here is that proponents of intervention are comparing a “typical” everyday outcome of markets with that of a 100% well-oiled, well-intentioned, perfectly functioning government – hence the Nirvana Fallacy. Now consider an analogous line of argument. Classical liberals push hard on the value of individual freedom – our impulse is to suggest that the default rule for social interaction is limiting government involvement to protecting property rights and promoting the rule of law. So, for example, folks like me support a system of 100% private, competitive, free-market education. Since this is so far from the world we live in, and beyond the pale for most progressive thinkers, the typical reaction is to invoke, “yes, I see how markets can deliver butter and cheese pretty effectively but wouldn’t some kid fall through the cracks in your market system? Is there any guarantee that all folks will be served?” Of course, the observation that, as we have said many times before here, many many many kids are falling through the cracks under the socialized system today seems to be ignored. It’s the Hades Fallacy. Compare the worst imaginable outcome of a competitive system and don’t even bother comparing it to anything, much less the dysfunctional system we have today.

Which brings us back to the Armenian tragedy. I toy in my mind very regularly with how a fully-competitive, voluntary society would work. I am not sure I’d even want to live in it, but it is a useful mental exercise. Can courts be provided on an open and competitive market? Sure they have in the past and continue to do so in limited places today. The same is true of roads, private security, package delivery and many other things that are thought to be traditional realms of government provision. But when we start walking down that path, it is not uncommon for a typical objection to be, “well, sure, but a total laissez-faire country with supremely limited or no government can’t work, just look at Somalia.” Which of course is the Hades fallacy on steroids notwithstanding other observations we might make about what the situation in Somalia is what it is. David Henderson reminded me of this when he came here a month ago. To put such an objection into clear contrast, simply ask yourself the question: “what is the worst imaginable outcome in a society with little government?” and then compare that to “what is the worst imaginable outcome of a society with a bad government?” The answer should be pretty clear to anyone who reads a little history. Government is the most brutal mass murderer in the history of humanity (OK, so I don’t know how it would compare to the primitive tribes if they scaled up their work to 7 billion people, remember that 1/3 of people I think died in wars back in pre-civilization times). We are all familiar with the Cambodian tragedy (which some people actually blame on US bombing during the Vietnam War – either way of course, it’s government all the way down), we remember the Jewish Holocaust and some of you may remember the path of doom paved by Mao in China and by Lenin, Stalin and the thugs in the USSR. But until recently I had not heard a single thing about the Armenian tragedy. Here is what Robert Trivers has to say about it: 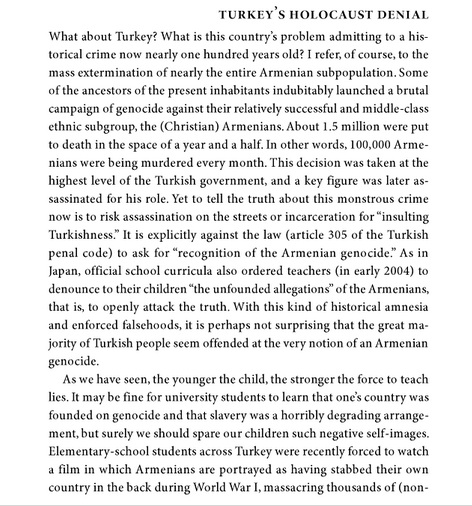 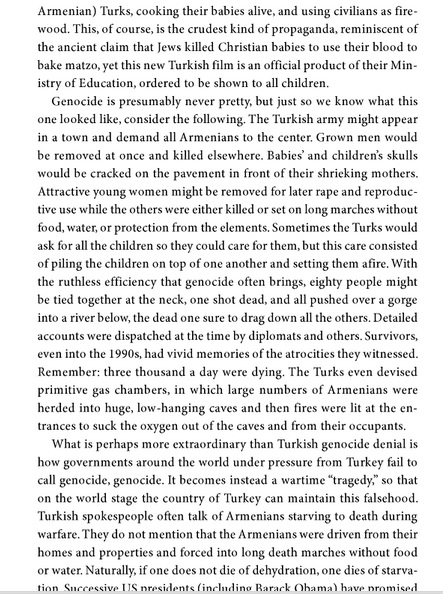 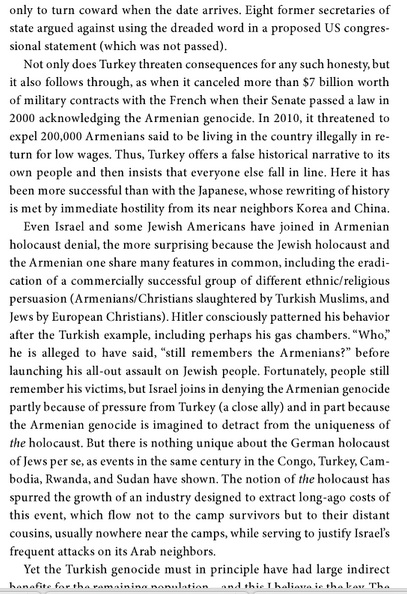 Not only do governments exterminate millions of individuals, they are the only forces capable of doing anything to hide these massacres from the outside world. The great Hades himself could not have conjured up a more potentially brutal institution.